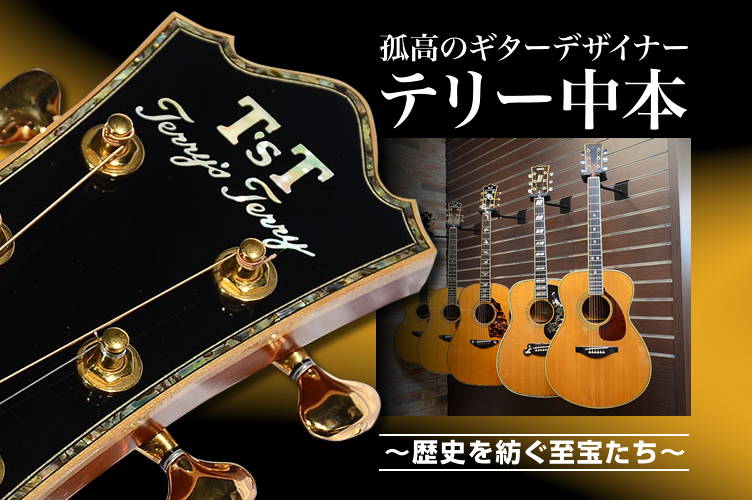 Without a doubt, Japan's acoustic guitar culture developed because of this man!
History might have been different if not for the work of Mr. Terry Nakamoto, who, as a solitary entity, is now a living national treasure!
The very concept of custom acoustic guitars and custom-made guitars would not have taken root in the industry as much as it did without Terry Nakamoto! He is the greatest contributor to the Japanese music scene! 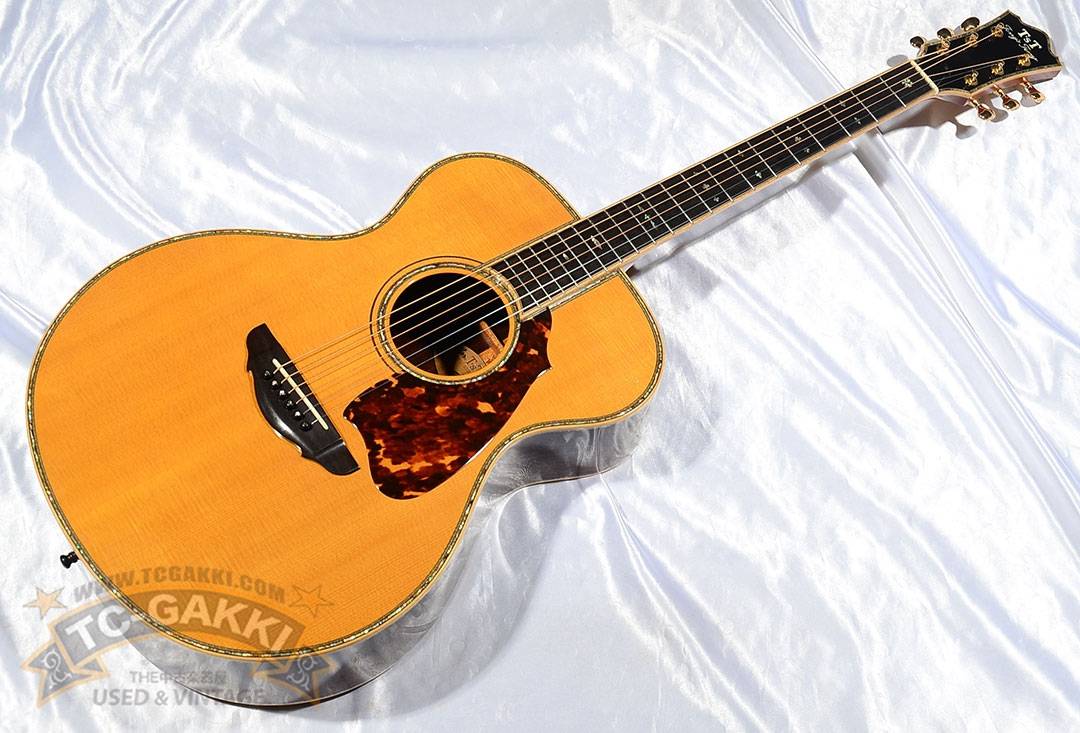 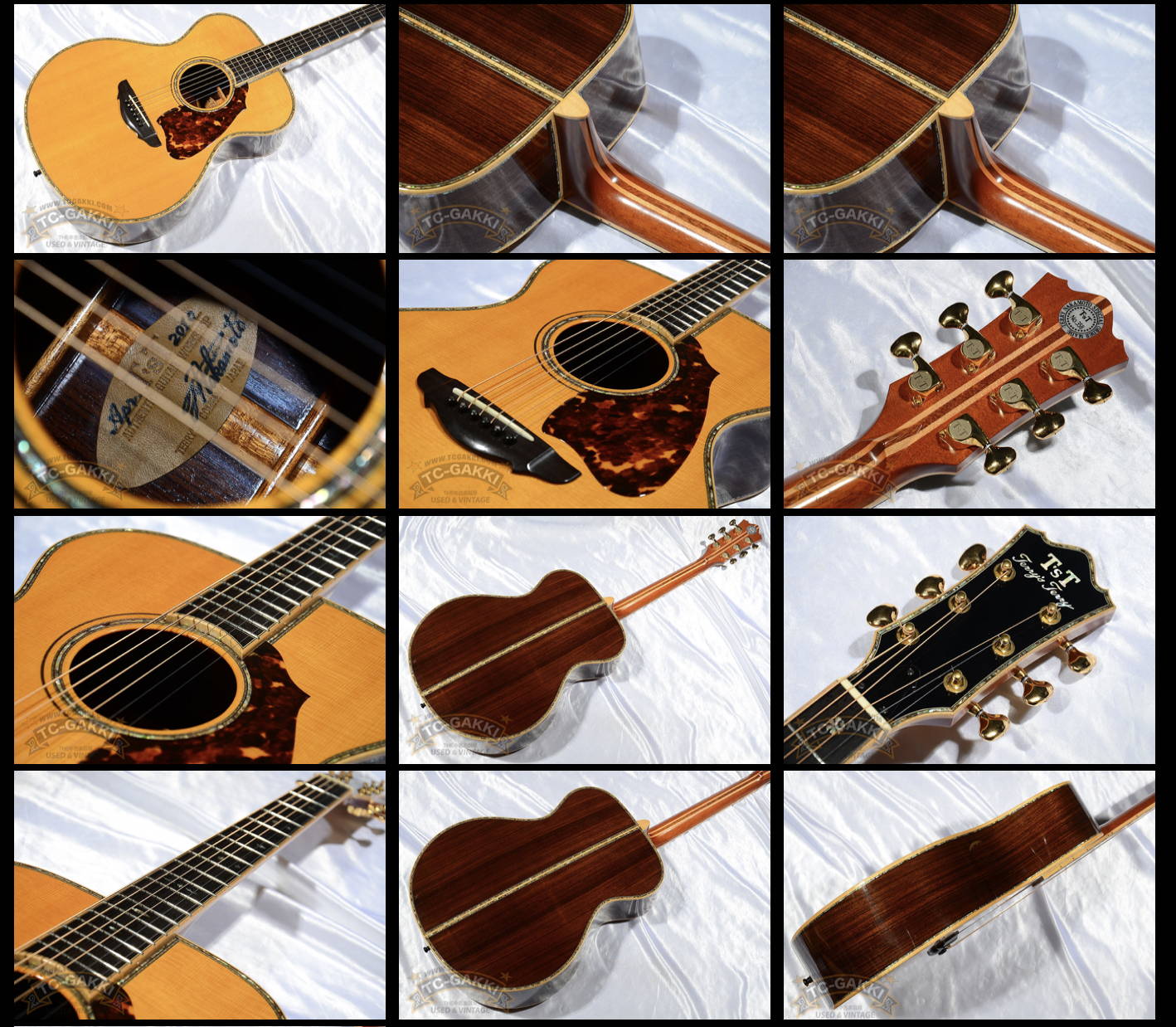 This is a Paul Simon shaped Terry's Terry gem!
The entire body is weather-checked with a nice atmosphere. You can tell at once that this is not a solid paint job, with this texture at this age!
Nut, saddle, frets, fingerboard, and neck condition are all in perfect condition! Perfect! No cracks, no repair history of any kind!
What the heck is this?
This volume from this body size! Overwhelming overtones! It's so thick!
The most surprising point is the balance of each string! Is someone somewhere adjusting the equalizer? It is so well balanced that you would suspect so!
I see, this is what a guitar is for! This is a gem that will make you change your mind! 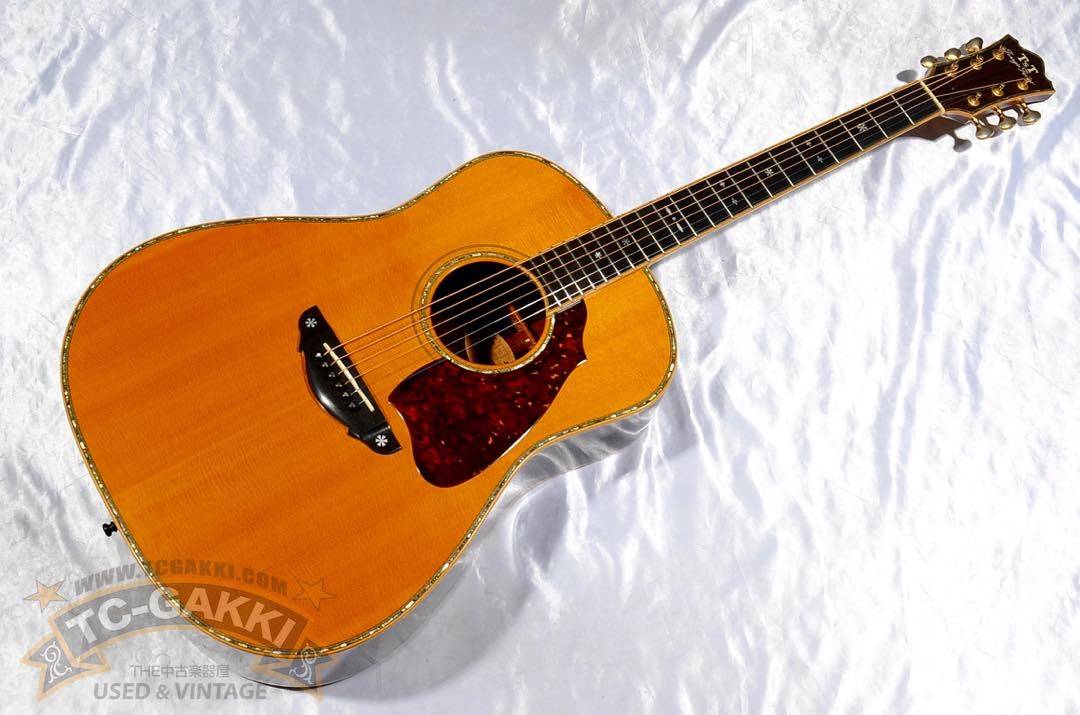 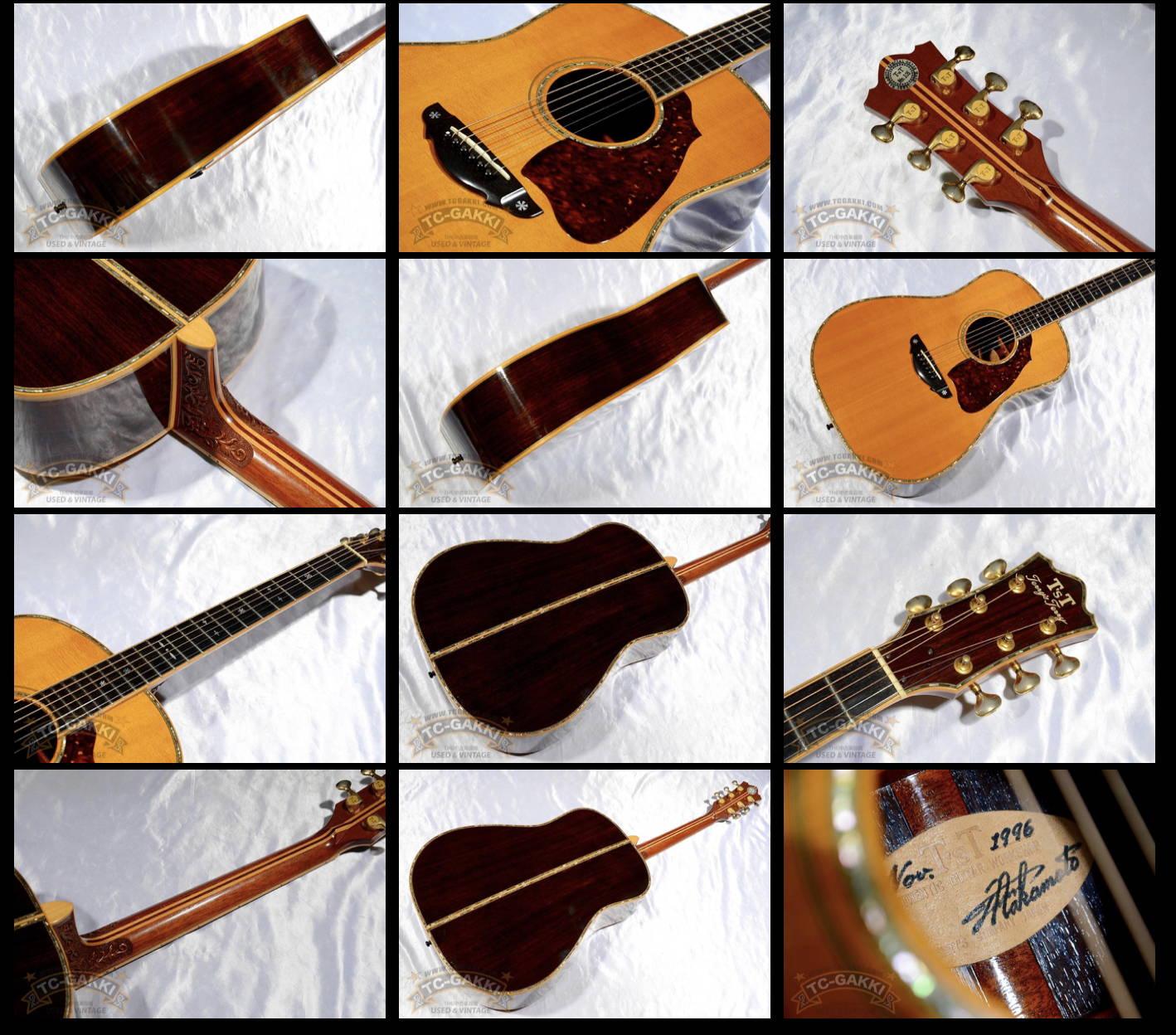 If you love acoustic guitars, the original Terry's Terry is the number one guitar you should touch at least once!
The TJ-100 is the most representative model of Terry's Terry!
This one sounds like no ordinary Terry's Terry!
The original high potential of this guitar has matured perfectly after 20 years of aging! This sound... Intense! This is an extraordinary situation!

An incredible amount of overtones! The thickness of the sound is intense! The low frequencies are powerful and the high frequencies are sparklingly delicate!
When the characteristics of each register become a chord and the ensemble becomes a chord, it resonates with a superb balance that gives volume to every register!
It is rare to even see this guitar in person, but a 20 year old guitar is museum class! 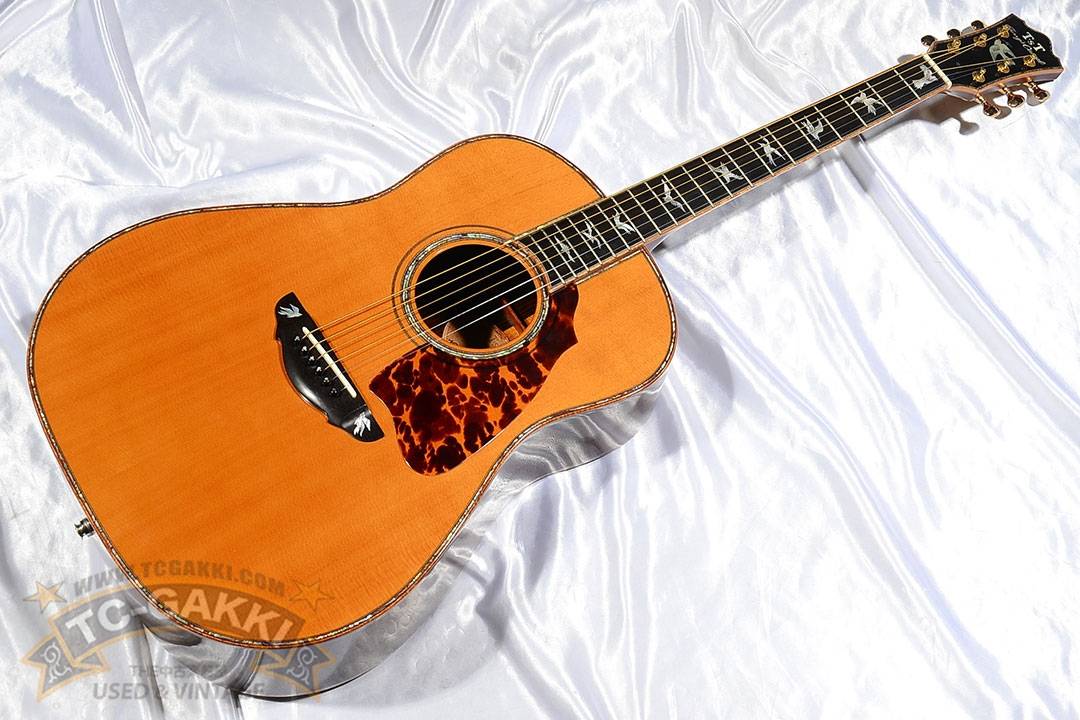 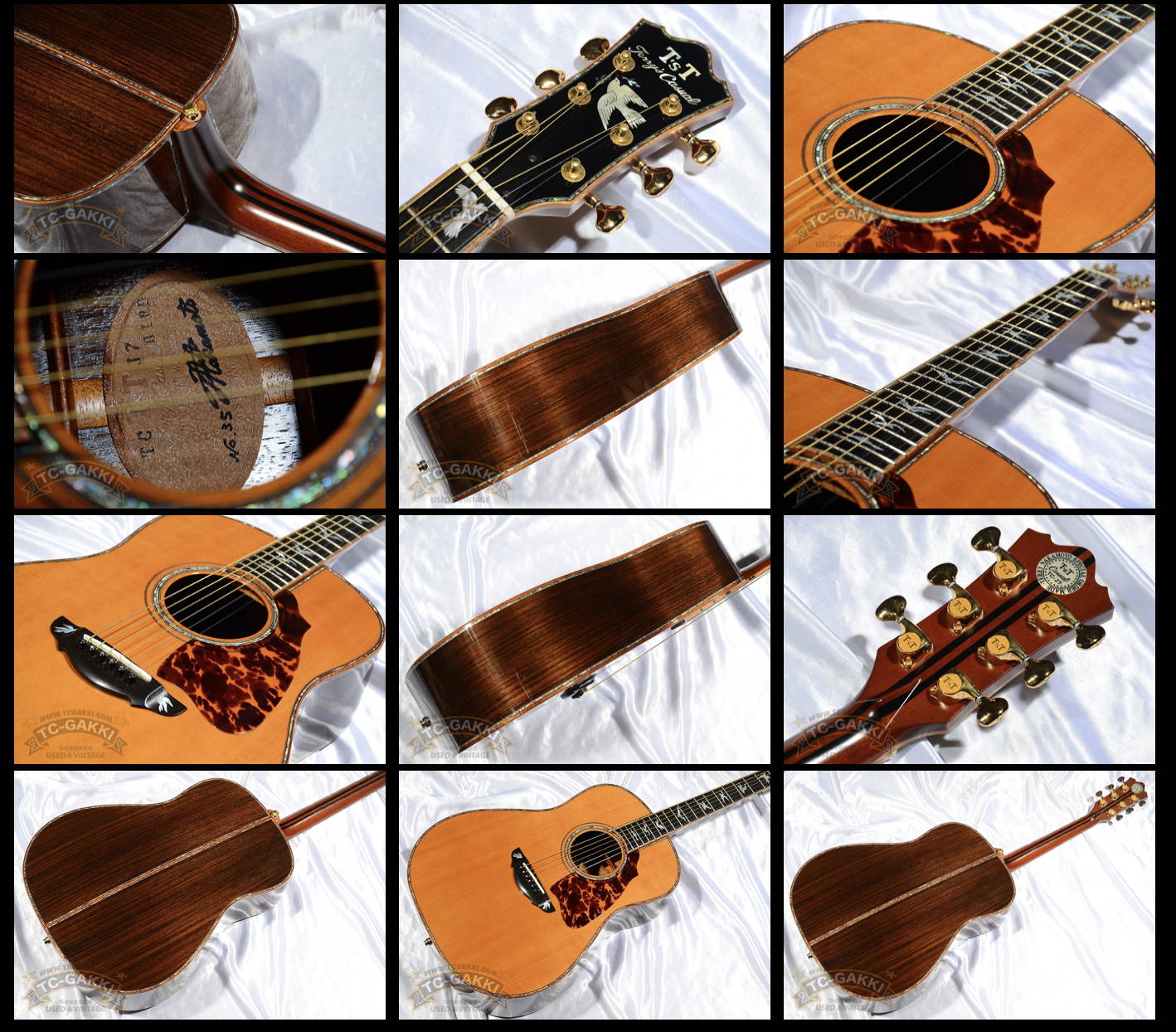 Terry's Casual is a brand that began planning and manufacturing in 2007.
In 2010, Terry's Casual released a commemorative model to celebrate the 20th anniversary of Terry's Terry!
Based on the flagship model TC-J7, it is the TC-J7 BIRD with a dignified bird inlay!
This is a commemorative model, so we put a lot of effort into its production, and it is one that concentrates the flavor of Terry's Terry!

The design and selection of materials was done by Mr. Nakamoto, and the basic assembly was done at Terada Gakki, which is Terry's Casual.
Of course, the shining label is the check signature of Terry Nakamoto himself, who appears in the final process! 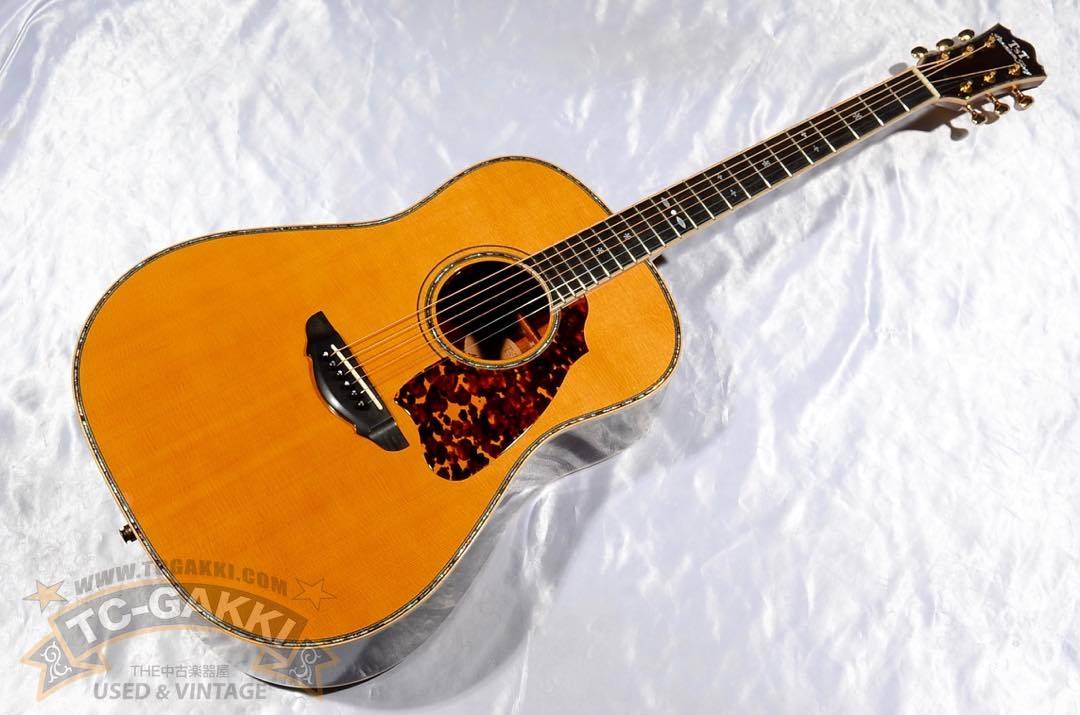 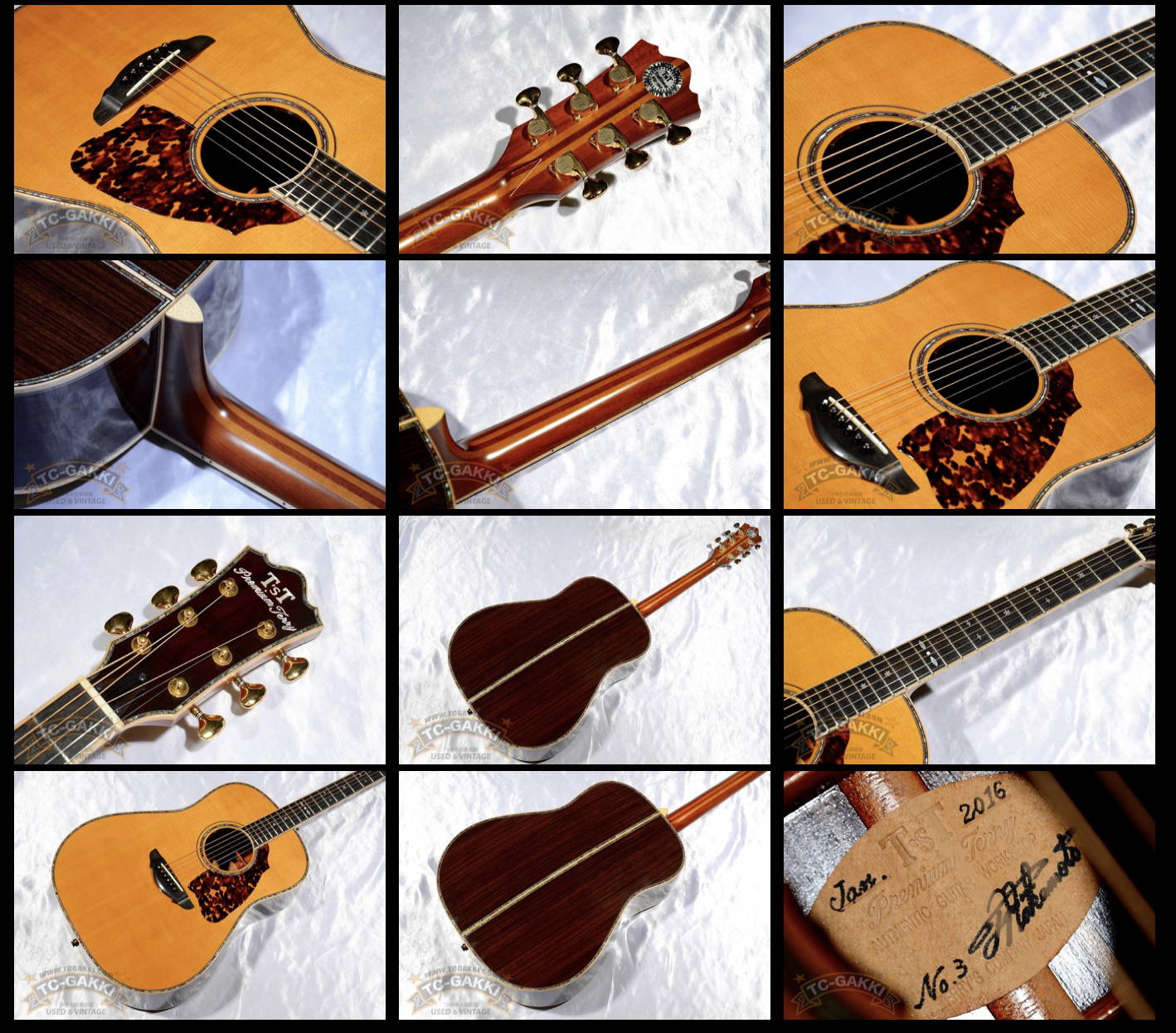 The PTJ-100 Traditional is the first product of the newly launched brand Premium Terry, appearing in 2016!
This is one of Terry's Terry's flagship model TJ-100, similar in size to the original Jumbo!
The color, graininess, and even the graininess of the wood are all top quality, and you can tell at a glance that it is top quality wood!

Like Terry's Casual, the basic assembly is done at an outside workshop, but the difference with Terry's Casual is that it is not done at a specific workshop!
The inlay work, woodworking, and assembly are all done by Nakamoto's trusted workshops!
The Premium Terry is designed to be as high quality as the original Terry's Terry, and of course, Terry Nakamoto himself will check the final process and sign the label! 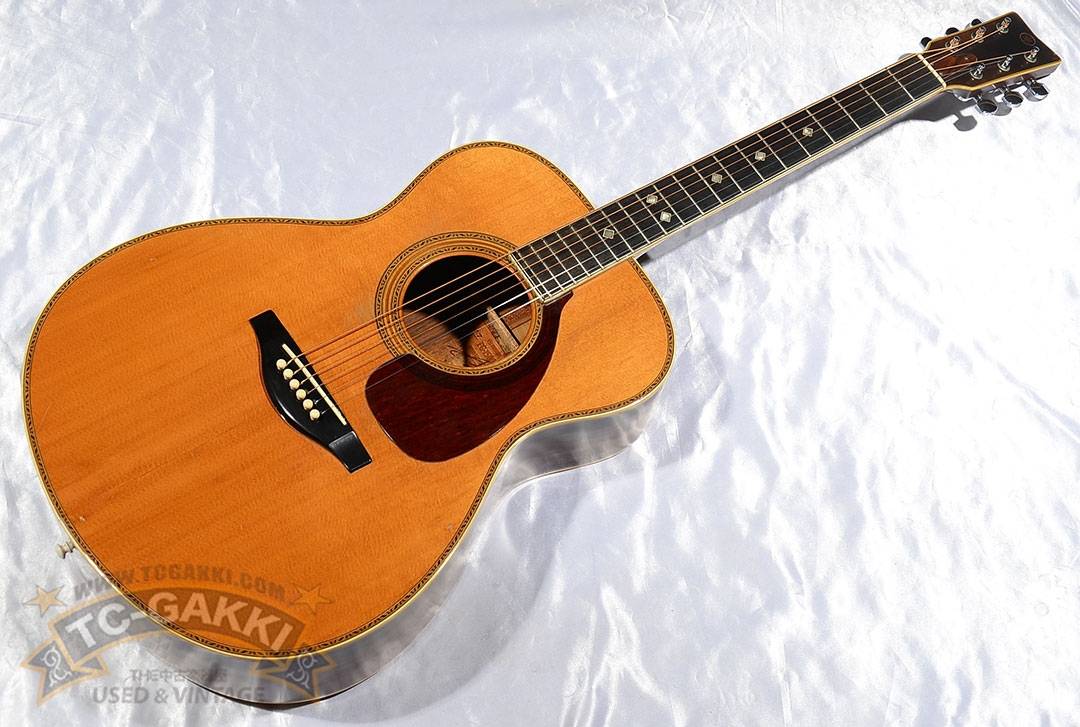 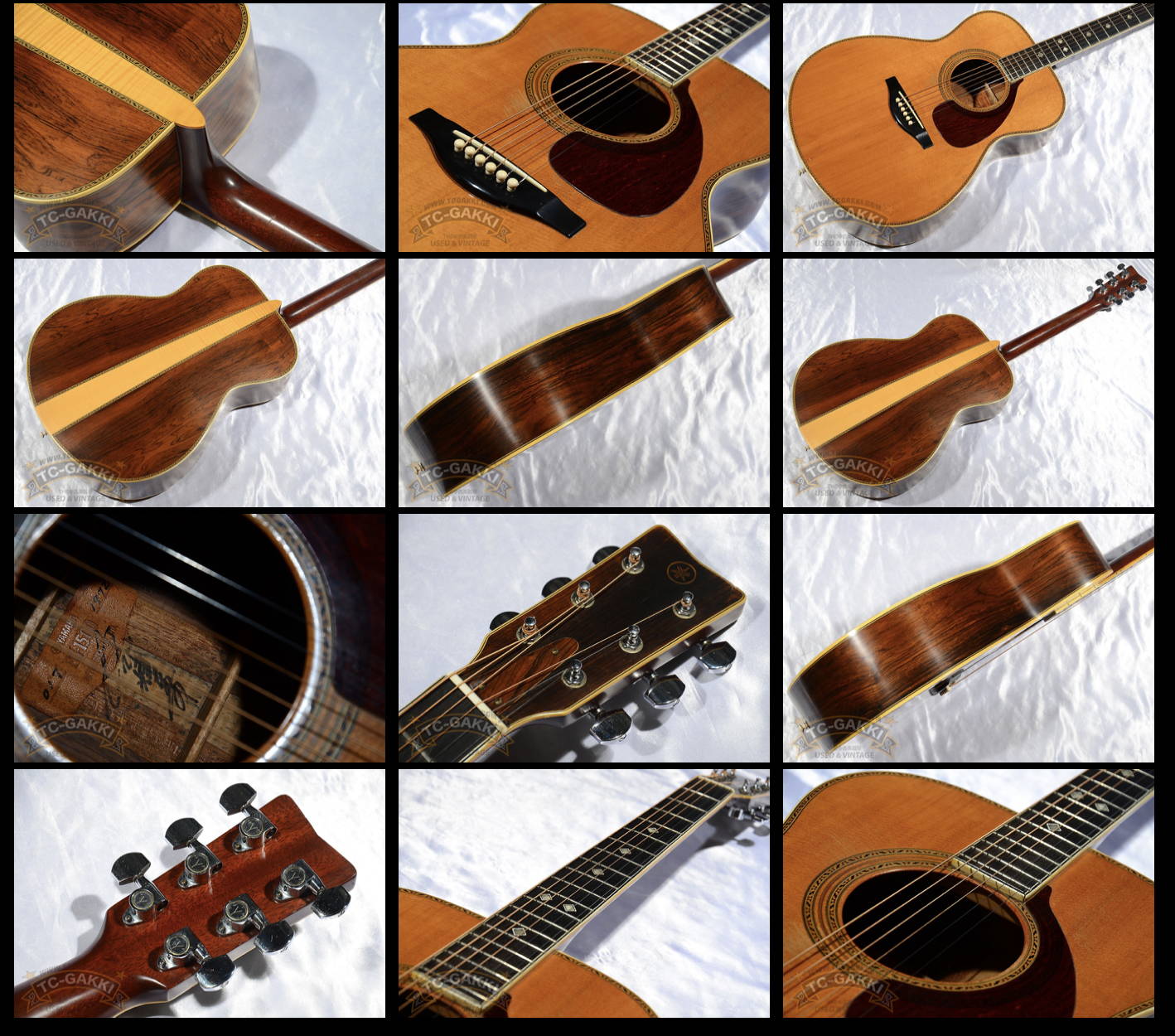 The Premium Terry is designed to be as close to the original Terry's Terry as possible, with higher quality, and of course, the final process is checked by Terry Nakamoto himself, and the label is signed!
The YAMAHA FG series! This is one of the early FG-1500!
Around 1970, players all over the world started to get each model, and one of the most shocking models was the FG-1500!
Bob Dylan also used this model!
Bob Dylan was seen holding it on his album jacket, and it was actually used in live performances, showing that the FG was a supreme model that was loved by professionals!

The Hakaranda has a bright and gorgeous sound with lots of overtones! The aging process has doubled the depth of flavor in both appearance and sound!
You can play it with your fingernails! You can also play the chord work! A true masterpiece! 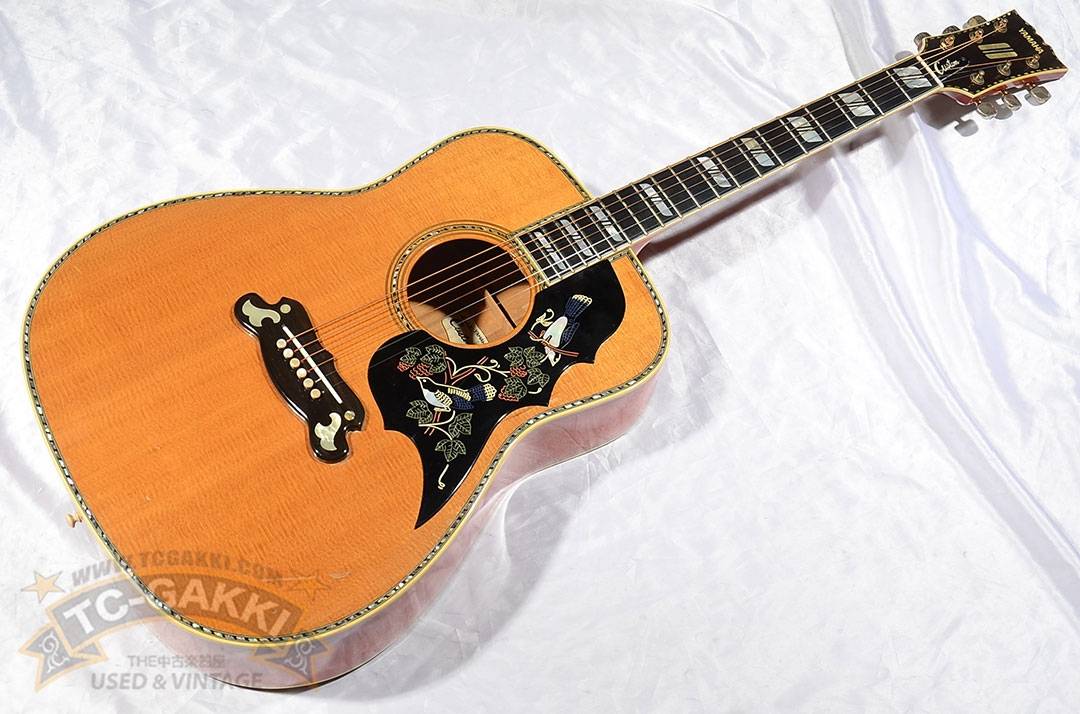 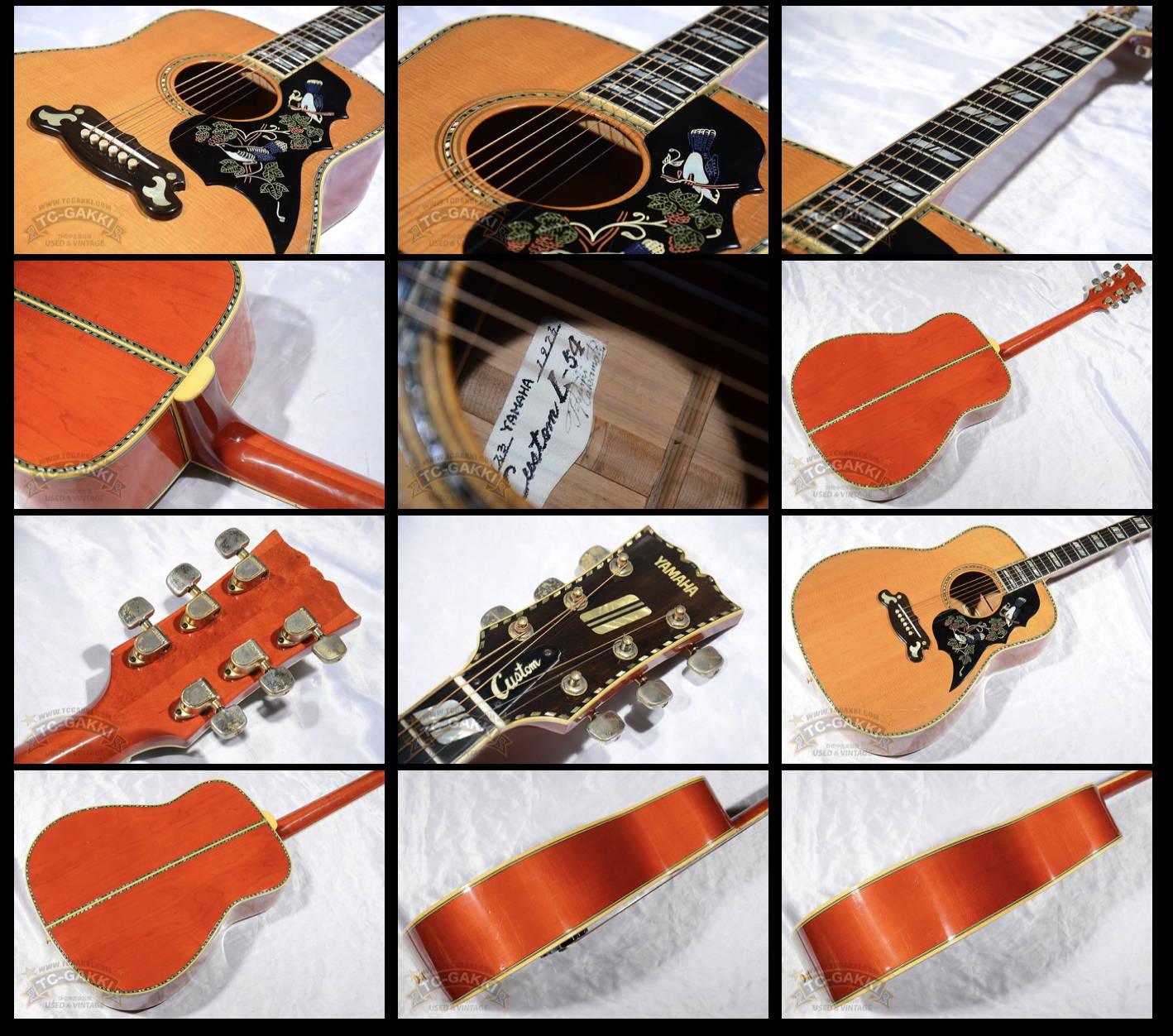 This is one of the gems that were produced from 1975 to 1980, commonly known as YAMAHA's Four Heavenly Kings!
The basic specs are spruce top with maple sides and back.
The inlay work on various parts and the original pickguard are gorgeous and give it an overwhelming presence!
The price is 300,000 yen at the list price in the 1970s!

This is a custom made-to-order model, so it is extremely rare to find one on the market today!
The sound has a full mid-bass resonance with the bright crispness of a Yamaha, and is wide-range, powerful, and expansive!
This is a masterpiece model of YAMAHA that was used by many big-name artists who were at the forefront of the scene at that time! 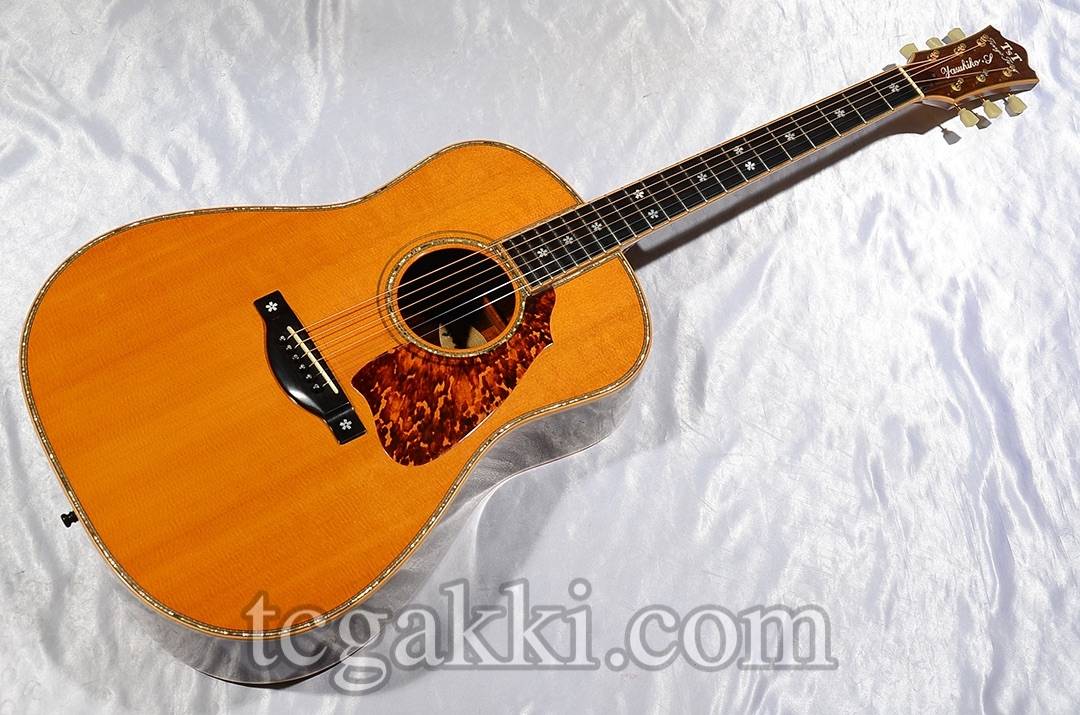 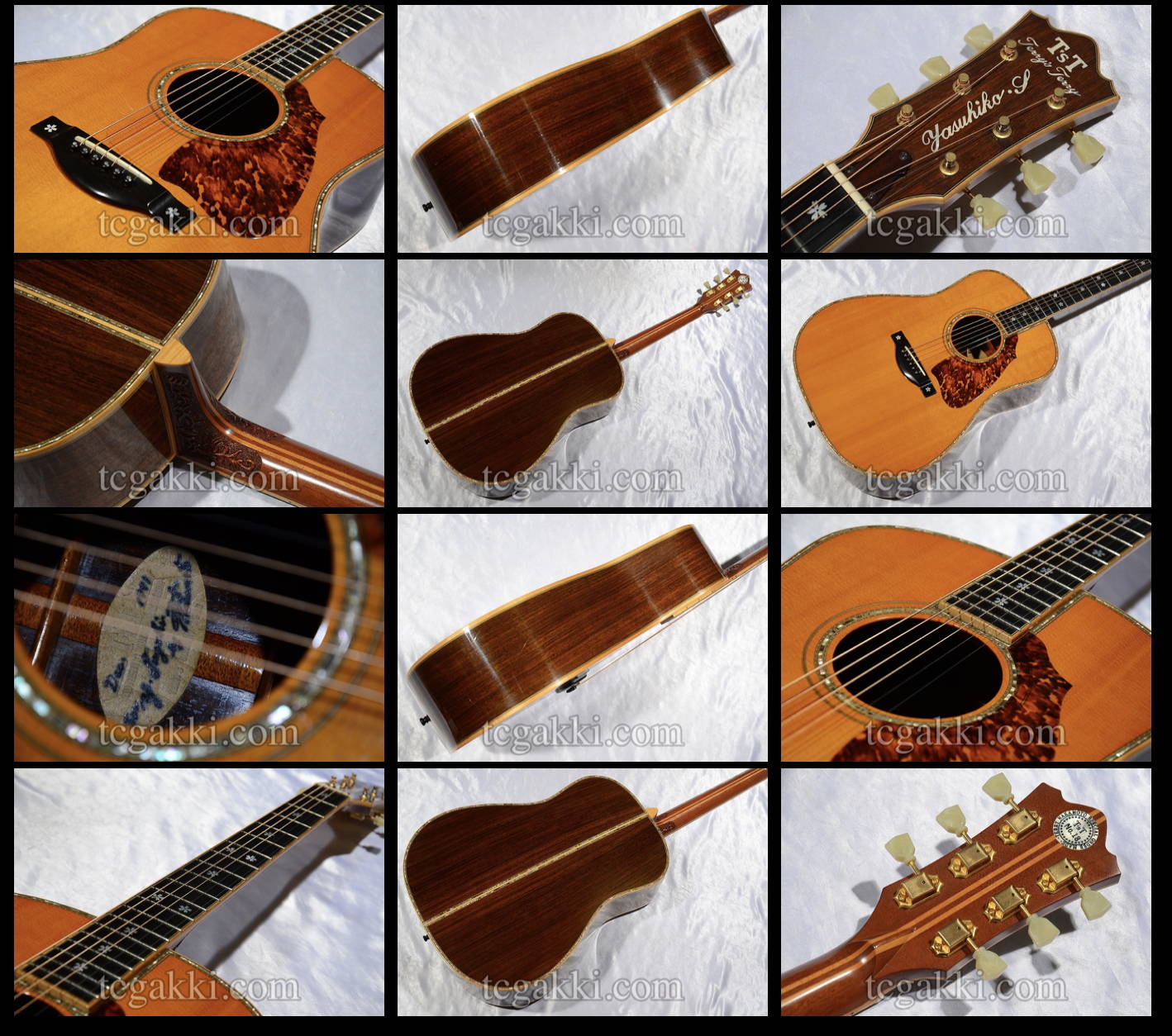 This is an early model of Terry's Terry, a special order-made model made in 1991, shortly after the company was founded.
The serial number is No.18, younger than Yosui Inoue's No.20 and Konosuke Sakazaki's No.21.
TJ type specification, the standard shape for T'sT. High-end specs with detailed inlays, binding, trim, etc., that distinguish it from regular specs.
Compared to models produced in recent years, the deadness of the wood and the lightness of the touch response stand out, and the feel of a raw instrument is very much present.
The ultra-thin paint has been somewhat burnished and colored, and the faint weather checks have come to create a dignified appearance. 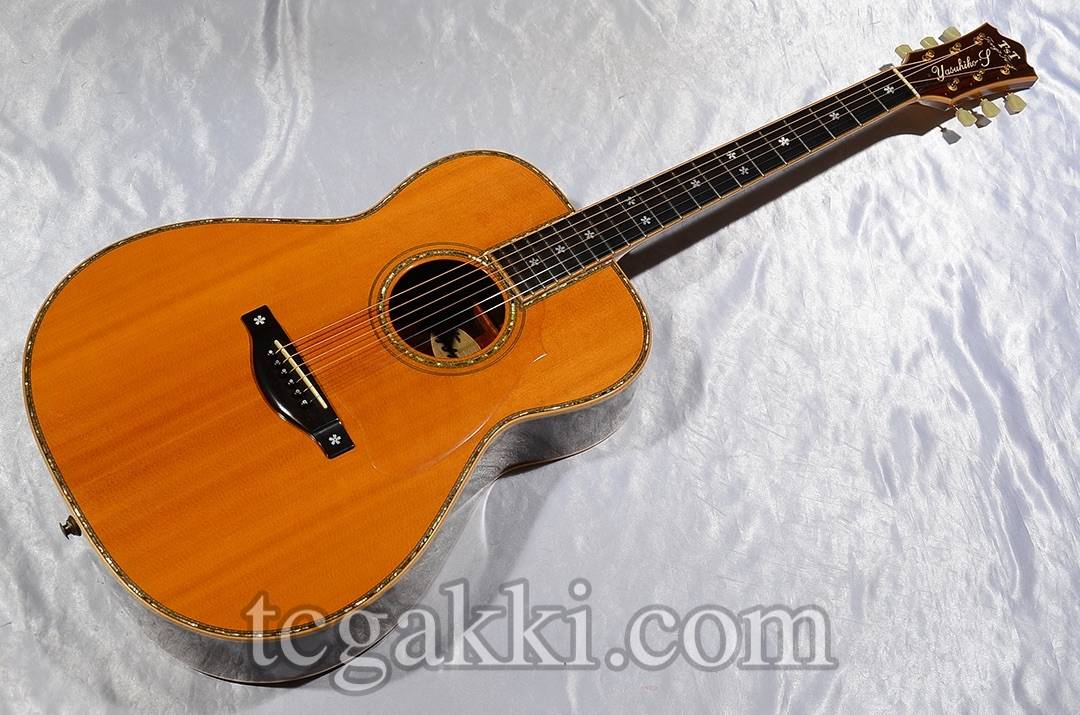 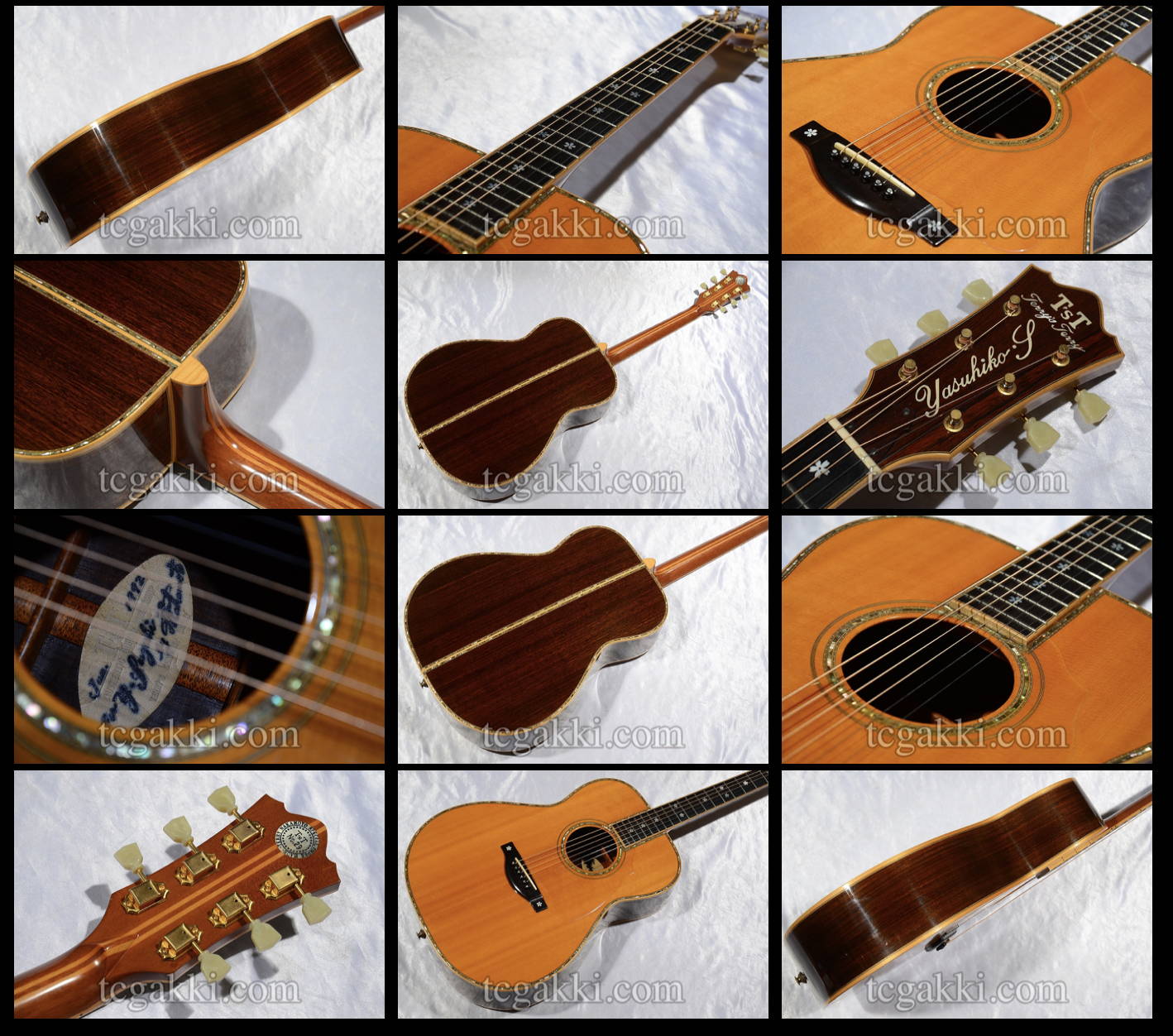 This model is also an early Terry's Terry phantom, a special order-made model made in 1991.
The serial number is a surprising No. 29, and it is one of the youngest machines along with the favorite machines of famous T'sT's favorite guitarists in Japan.
The small body specification is reminiscent of the Martin 000, which is rare for T'sT. This is a valuable piece that shows the flexibility of the custom-made guitars of the time.
The touch response is extraordinary lightness, and the quick touch of T'sT combined with the small size body makes the sound stand up wonderfully, and all the bandwidths come through thick and sharp. The sound is very fast and clear, and the sound is thick and sharp in all registers. The volume on strokes is so loud that it is hard to imagine from the size of the instrument. The wide range of sound is very impressive. 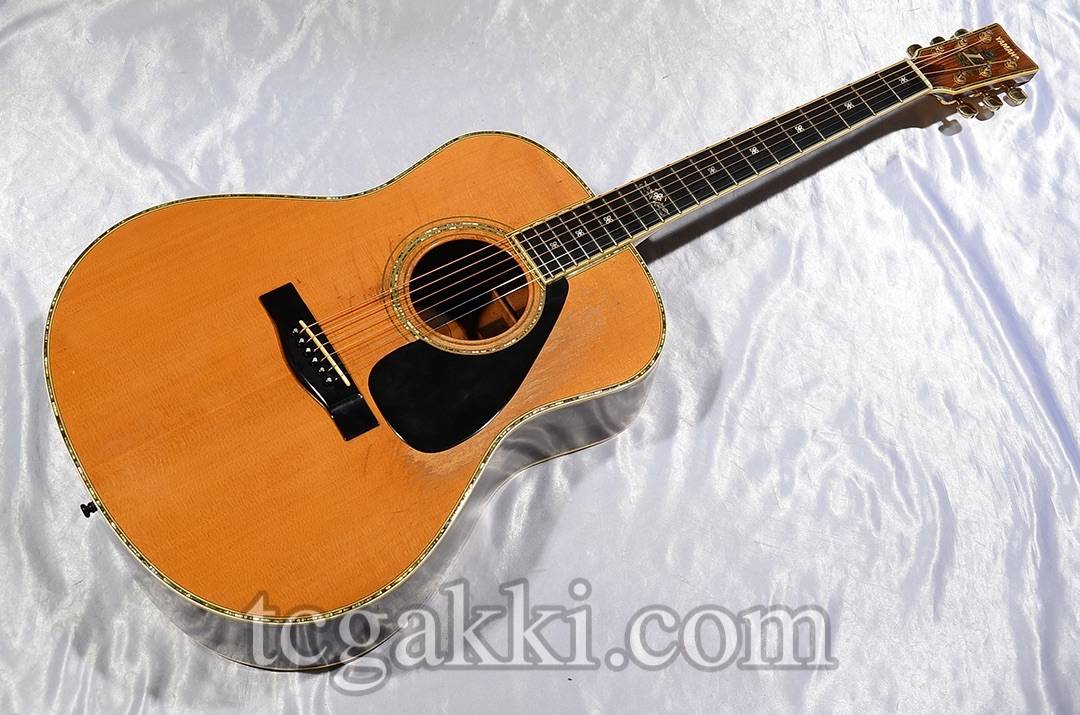 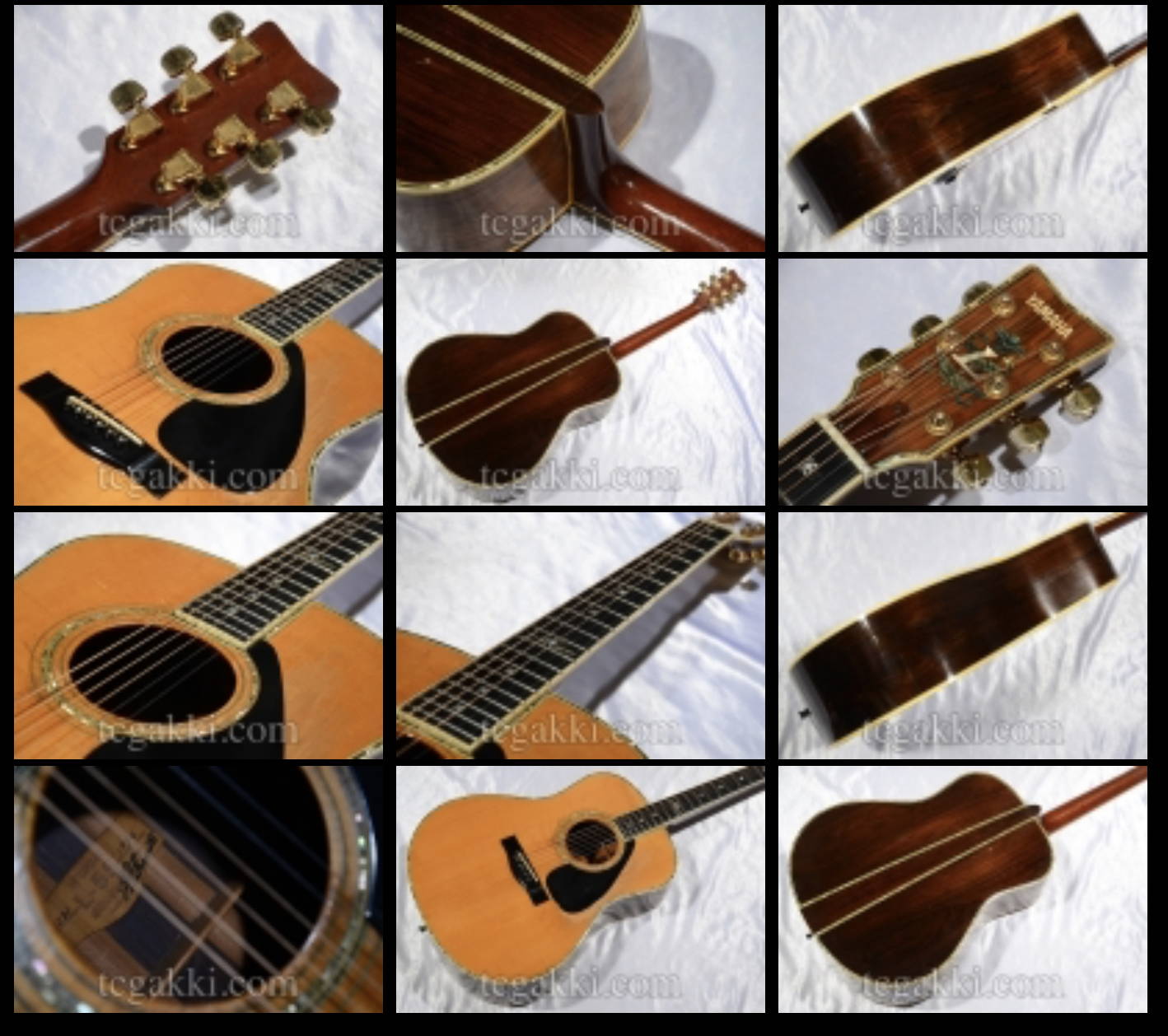 The top model of the time, with gorgeous head inlays and superbly grained, swirling, flowing Hakaranda veneer! The leather label is signed by Terry Nakamoto, the current president of Terry's Terrey (T'sT)! You can tell that this was one of the highest grade Yamaha's at the time!

The tone is amazing, with an overwhelming range of sparkling tones from the high quality construction, which clearly shows that Mr. Nakamoto was involved in the production of this instrument! You can feel that it has been played and played, and you can feel it from its sound and appearance! This is one of the finest!

There are many professional musicians who actually use Terry's Terry, and it would be amazing just to list them in alphabetical order. Takahiko Ishikawa, Shozo Ise, Yosui Inoue, Nobuyasu Okabayashi, Toshio Kadomatsu, Kazuyoshi Saito, Konosuke Sakazaki, Ken Sakurai, Masashi Sada, Toshihiko Takamizawa, Go Nagabuchi, Chiharu Matsuyama, Kosetsu Minami, Kozo Murashita, Takuro Yoshida, and the list is endless!
Tsuyoshi Nagabuchi, in particular, has been a close friend of ours since his debut and is famous for owning Terry's Terry serial number 1. Also, big names from overseas such as John Lennon and Paul Simon have used guitars made by Terry Nakamoto!

It may sound corny, but usually a manufacturer signs an endorsement contract with a professional musician. The musician is provided with the instrument under favorable terms and conditions, and the instrument is maintained in perfect condition for recording and live performances. In exchange for providing the instruments, the manufacturer receives a huge advertising advantage because its instruments always appear in magazines, on TV, on CD jackets, in music videos, and in other media that expose the musician. I want the same instrument as that musician! We can also expect such an effect.

You can really feel that there are matters apart from the fads of music and manufacturers. This is the entrance to a special time axis that flows to people who truly love music and musical instruments.
This is the responsibility of a store that handles used and vintage instruments.
TC Gakki will continue to strive to introduce as many of Terry Nakamoto's works as possible to you.