Miracles always happen out of the blue.

I've encountered a few miracles involving musical instruments while working in a music store.
Musical instruments that had not been sold for a long time were sold the next day just because a certain musician played them, which is a common occurrence for music store clerks.

Well, the miracle I am going to introduce here started with an e-mail I received one morning.
I own a certain guitar and amp, and I'm looking for a music store that will buy them."
It was an e-mail from the United States. 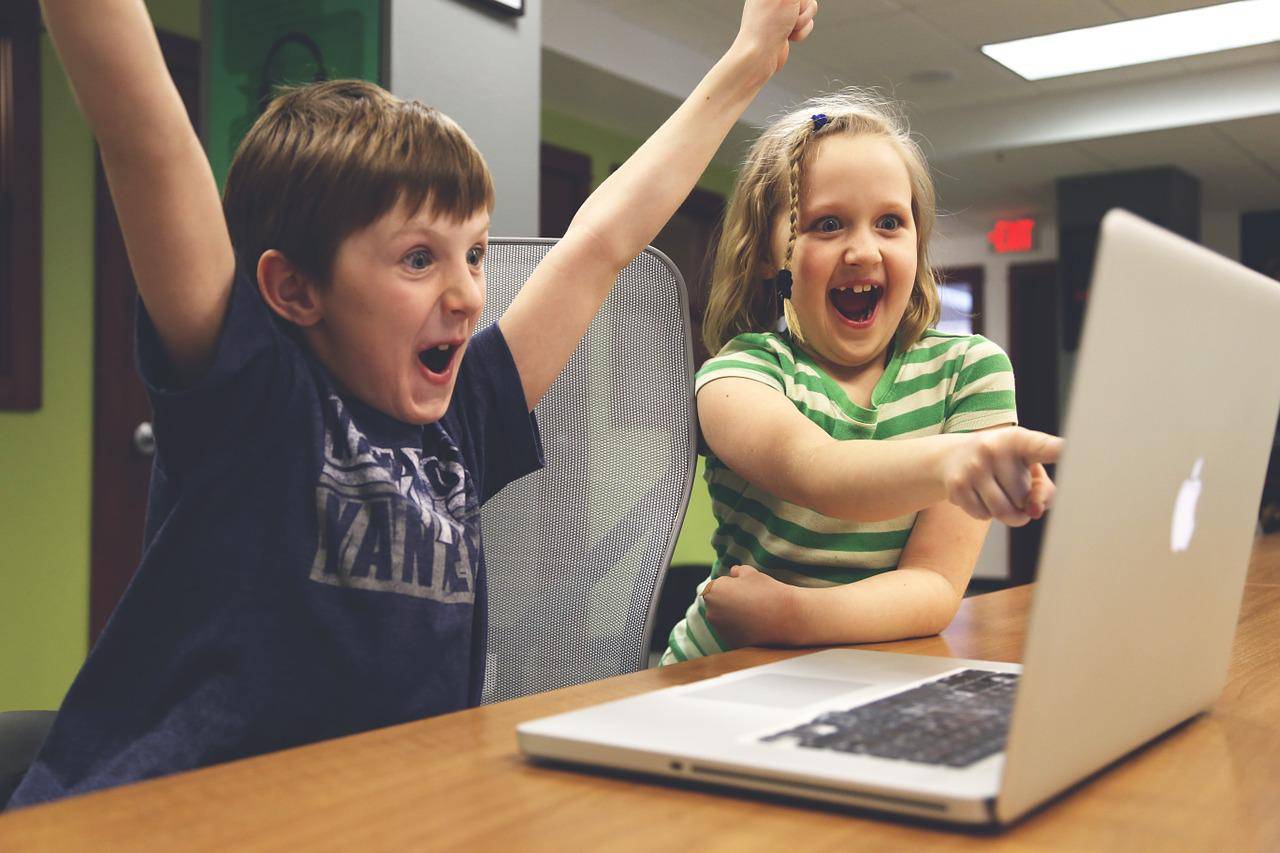 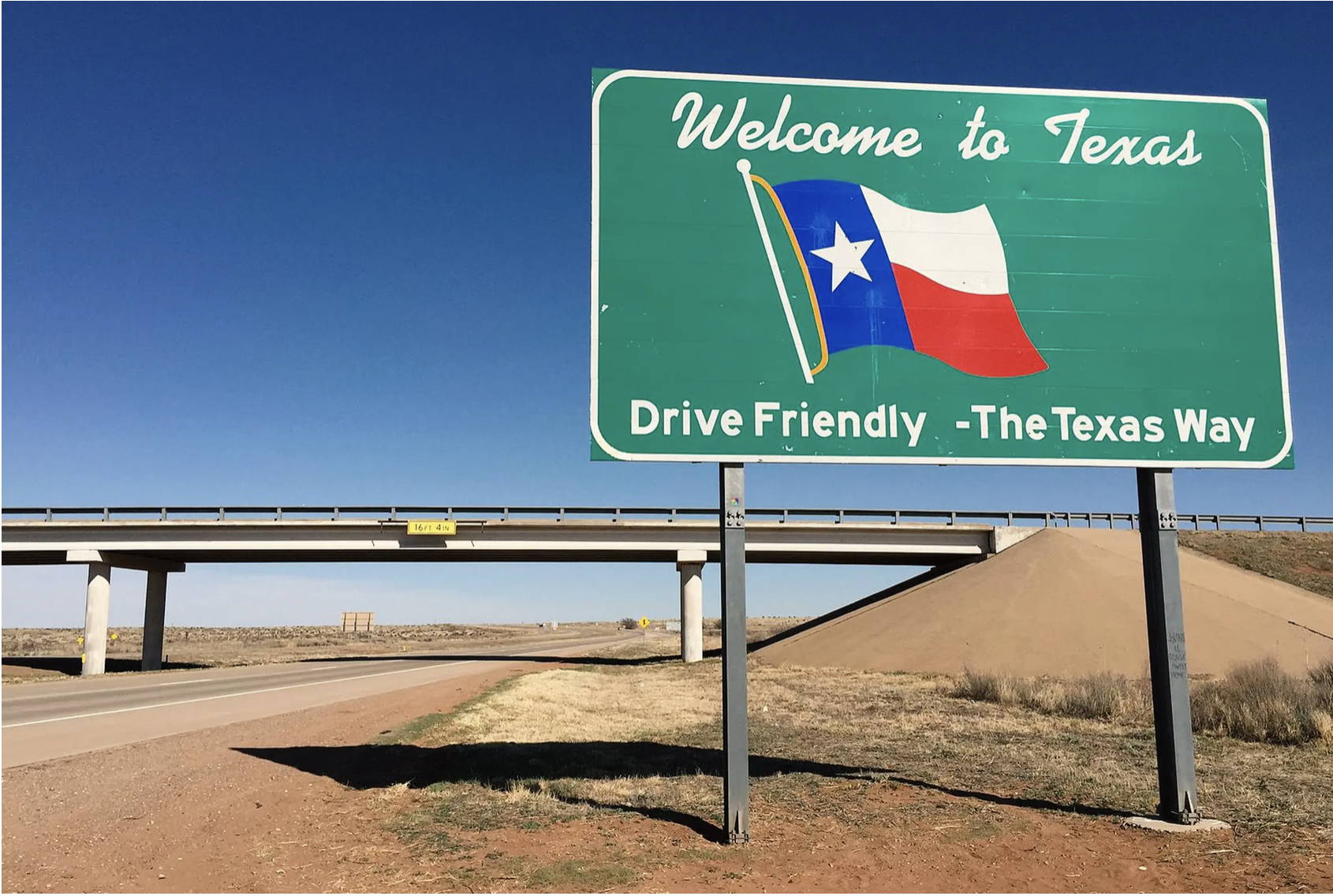 In my experience, I have often been cheated by responding to suspicious sales e-mails from overseas, only paying money and not getting the actual product. This time, however, I somehow got the details of the story.

The man who sent me the e-mail lives in Texas, the United States.He said that he wanted me to come because an acquaintance of his had asked him to sell me this instrument.

I replied, "I'm on my way and I want to show it to you," despite the fact that I didn't even know if the deal was worth believing.

This is America! It was insane, but I don't know why I was drawn to the letter and its contents. I'm sorry, my usual tendency to make quick decisions has come out...

Furthermore, the other party demanded cash for the purchase.

If you open the front door with such a large amount of money and say "Hello! Or, you could be pistol-whipped!

And that's just in Texas, a little bit dangerous area.... 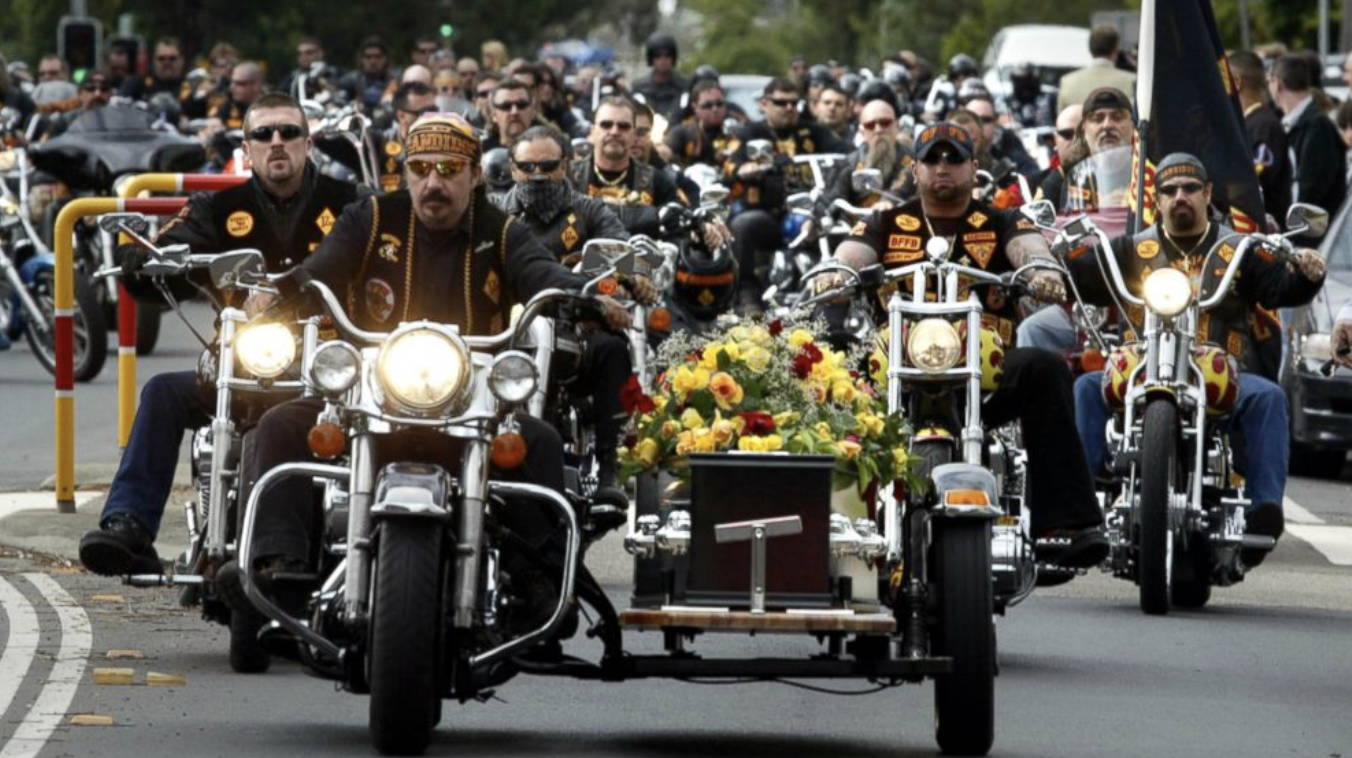 In the end, I thought about it a lot and decided to go to the U.S. right away, and left for the U.S. with cash in both hands.

We got off the freeway and headed down the open road, driving along a route where we didn't even know if guitars really existed, feeling a sense of excitement that we didn't know whether to be anxious or hopeful.

About an hour after leaving the airport, we entered a long, quiet residential area with houses sparsely spaced and surrounded by bushes between the road and the houses. We stopped the car in front of a blue-roofed house that gave the impression of having been lived there for a long time.

I pressed the doorbell, feeling excited and scared that I had really arrived. After a while, the door opened and a strong man, or rather a normal man, invited me into the house. Thank God, I won't die here," he said.

It seemed that he was the only one, and it was honestly a hot moment. The fact that it was not a funny ending and that it was a person who really existed gave me the greatest sense of relief. 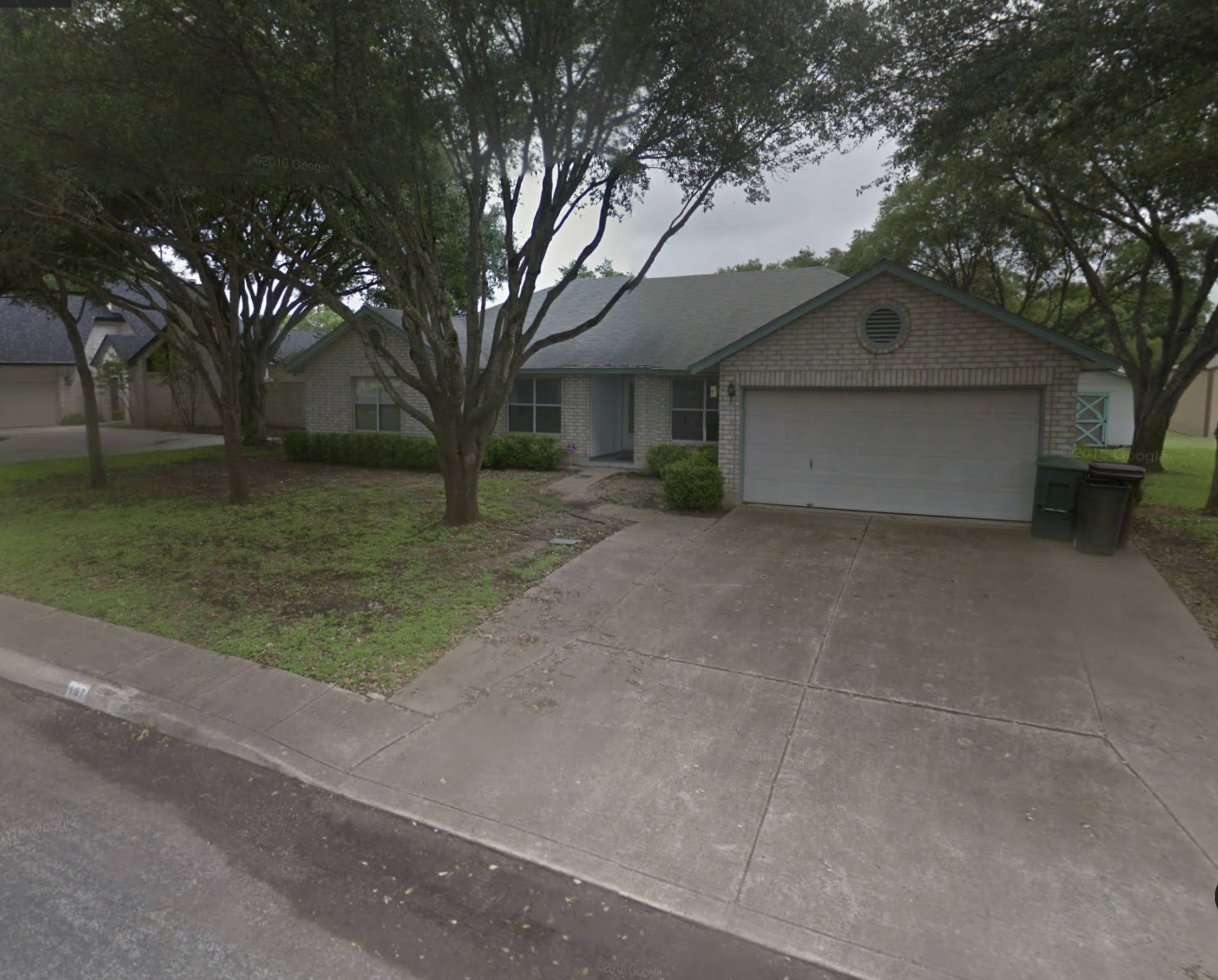 He told me that the client was not interested in guitars at all, and that he had visited the house himself because he had asked him, a guitar player, for advice. 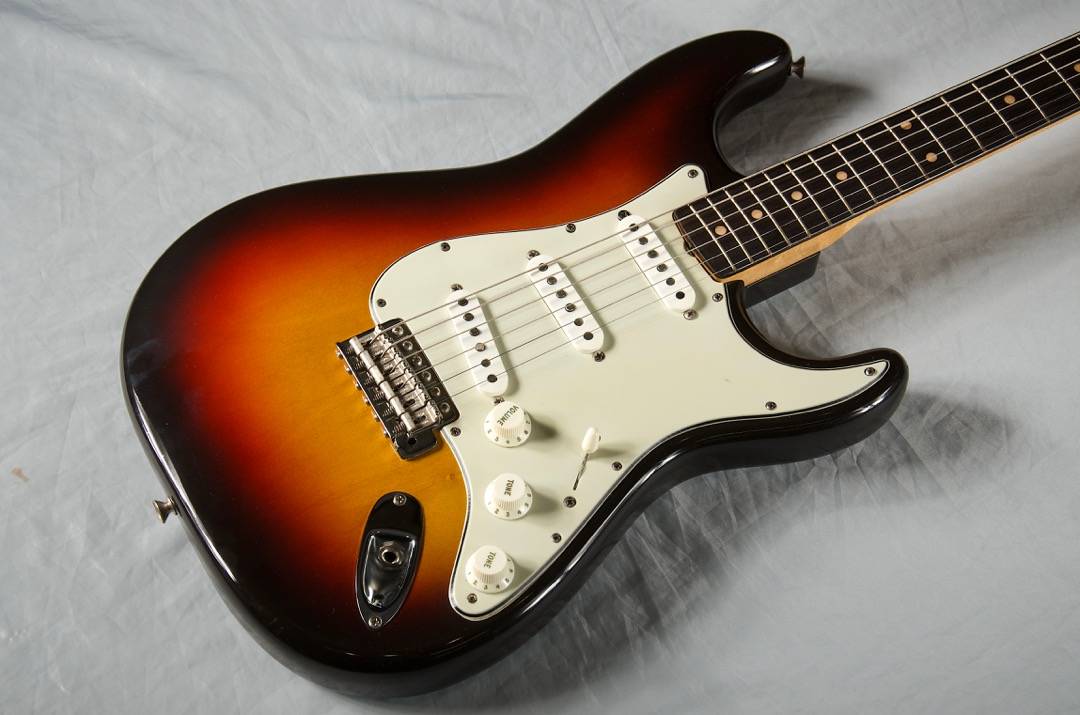 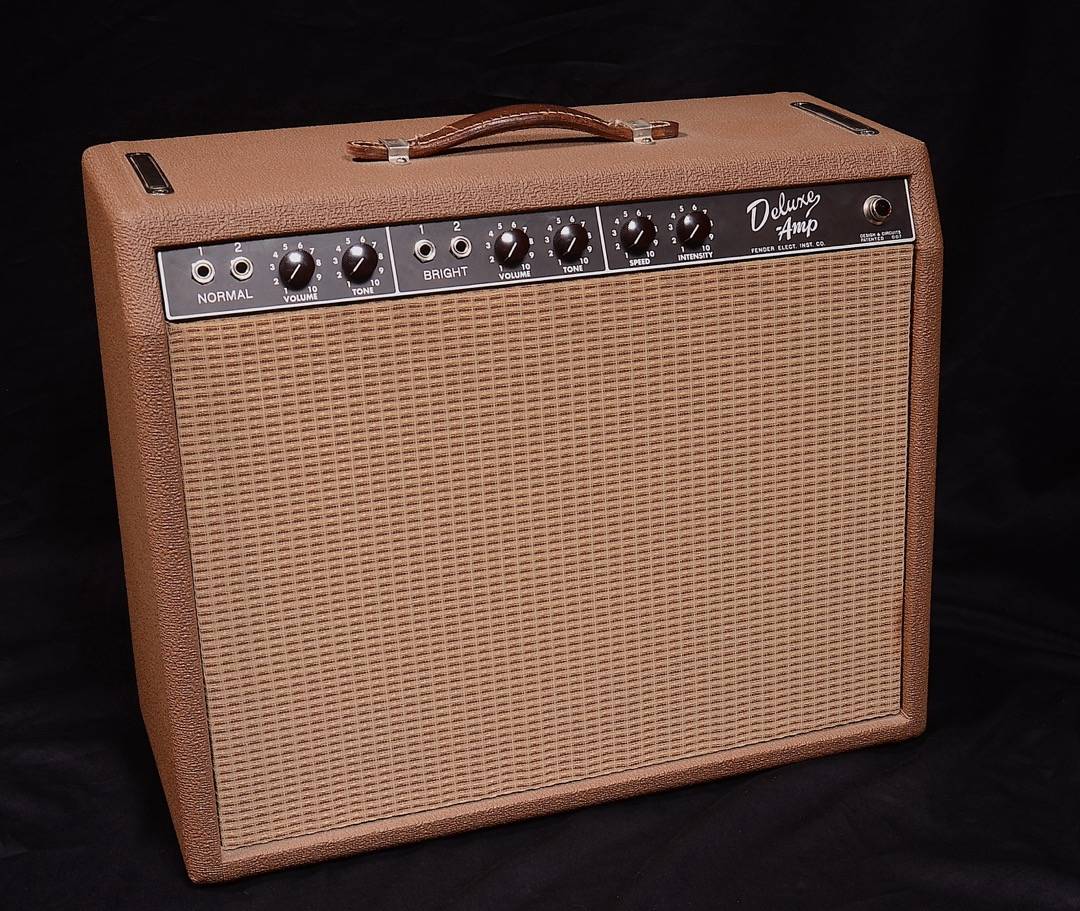 He nodded his head and said that he still remembers the excitement he felt when he finally arrived at the house after taking out the piles of clothes, shoe boxes, bags, and other items in the storage room under the stairs.

There, in a brown case, was a "brand new" 1961 Fender Stratocaster and a "Brownface" Deluxe Amp. Considering that it was over 55 years old, I held the amp inside for fear of damaging the handle.

According to the story, when the acquaintance was a boy, his father bought him a newly released electric guitar in 1961 to encourage him to play music, along with the amp.
The boy, who was not keen on it, reluctantly took the guitar and went to learn from a teacher who was teaching guitar nearby at the time, but his interest soon turned to cars, and the guitar was left in the storage room under the stairs at home, along with the amplifier.

The guitar and amp, along with the bitter memories of his father, were forgotten, and for half a century the guitar and amp sat unused in the shed, never to be taken out. 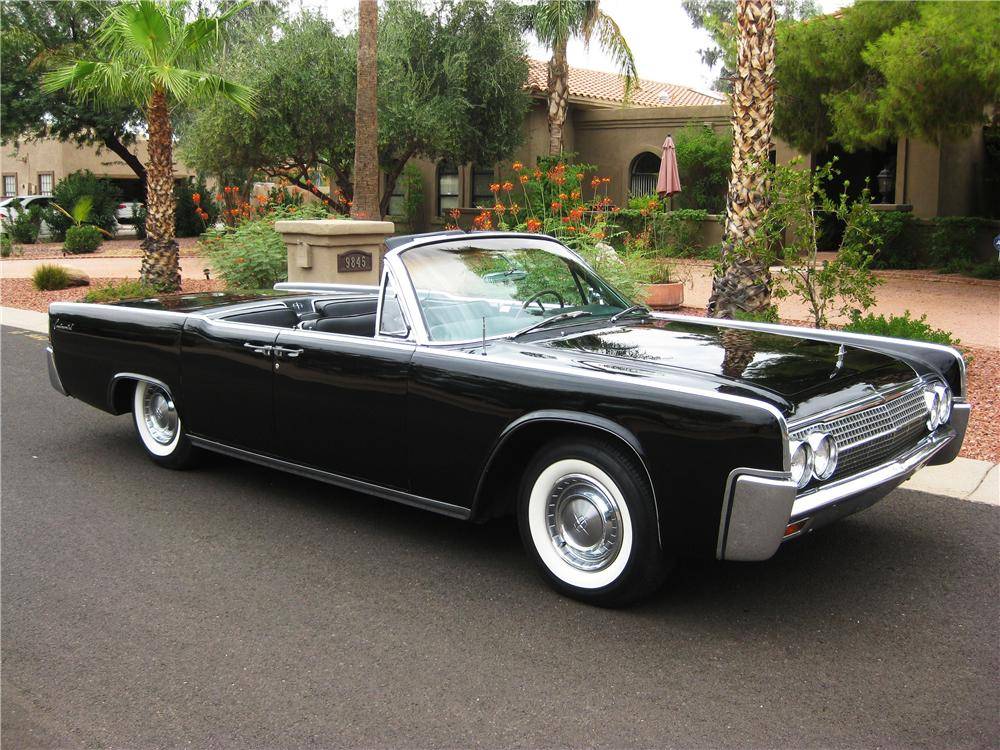 In the 1980s, his father had already passed away, and when his elderly mother was sorting out his family affairs, she happened to find the guitar and amplifier that his father had bought him all those years ago.

After the transaction was over, we had the usual pizza and coke and chit-chat.
According to my acquaintance's mother, his father had wanted his son to play a musical instrument because he regretted his childhood, when he loved listening to music but was not wealthy enough to buy one. 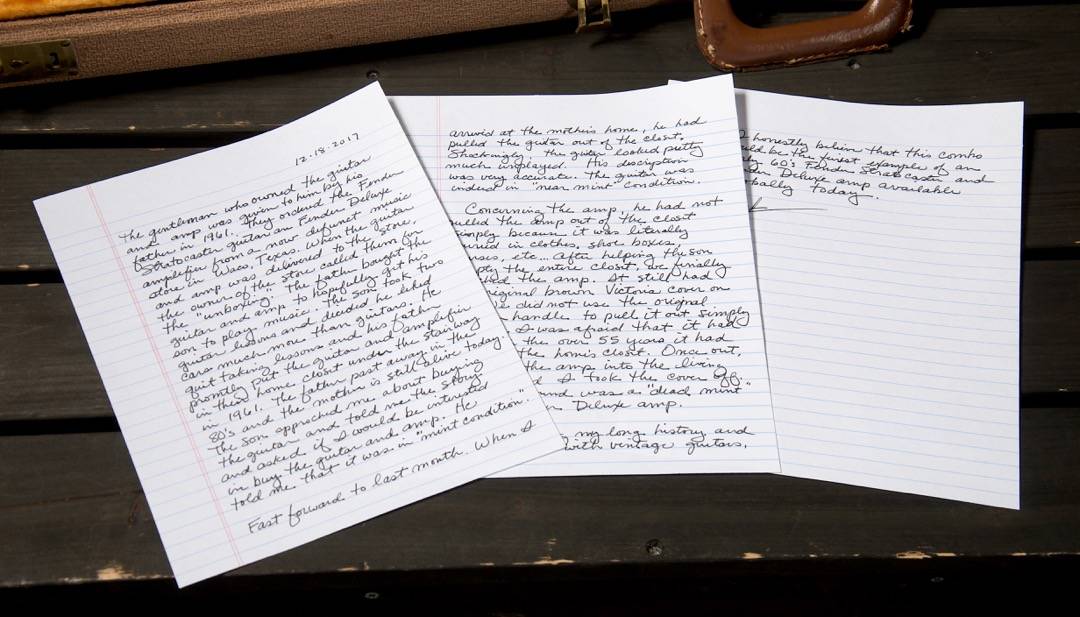 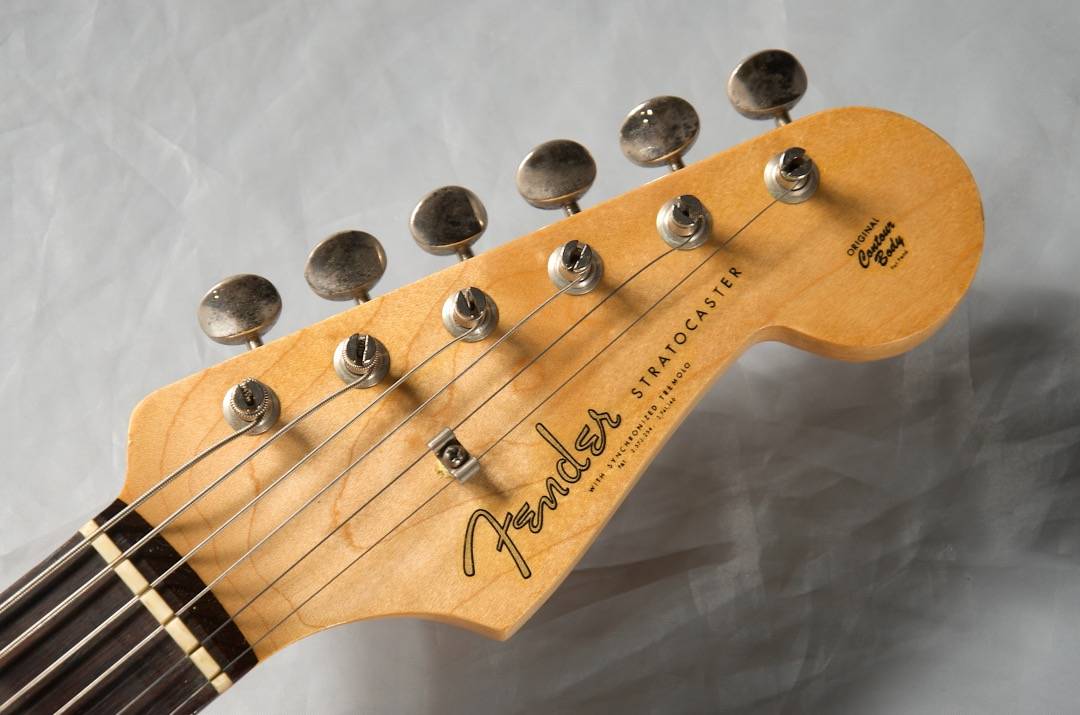 He wanted his son to learn to play an instrument, so he chose a Fender Stratocaster and an amp, which had just come out and were getting a lot of attention at the time. He ordered the instruments from a music store in his hometown of Waco, Texas.

He knew that his son had stopped touching the instrument altogether, but he selfishly gave up on the idea and never talked about it again. And the guitar and amp were forgotten, tucked away in a closet.

Strangely enough, the guitar that his father left him after he passed away was worth a lot of money compared to what it was worth at the time.

For us, the miracle may be that we came across such an instrument. However, we cannot help but think that the real miracle is the history that will be carved out of it. 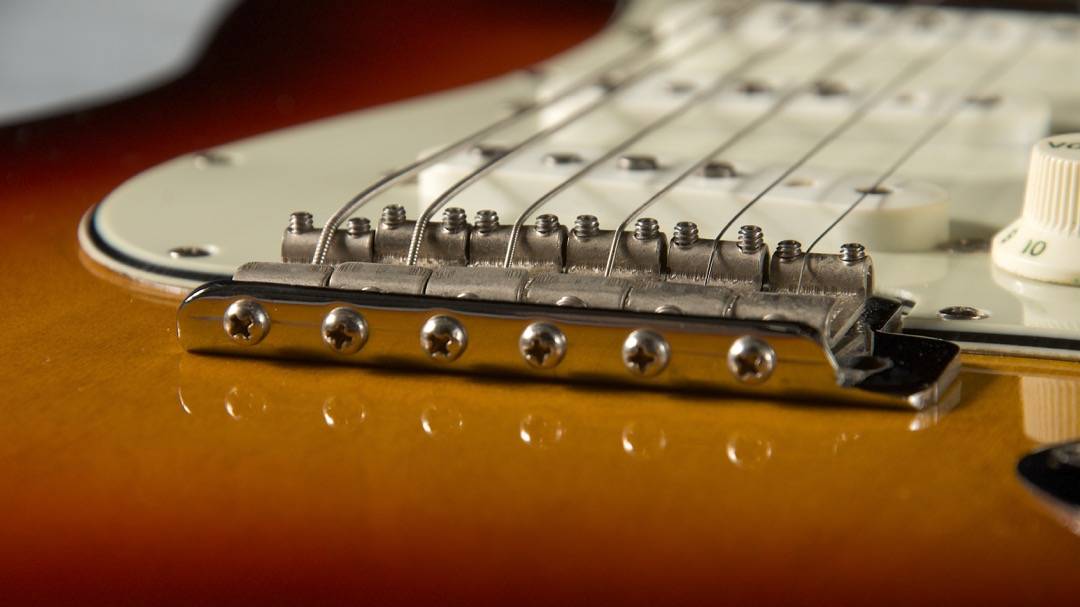 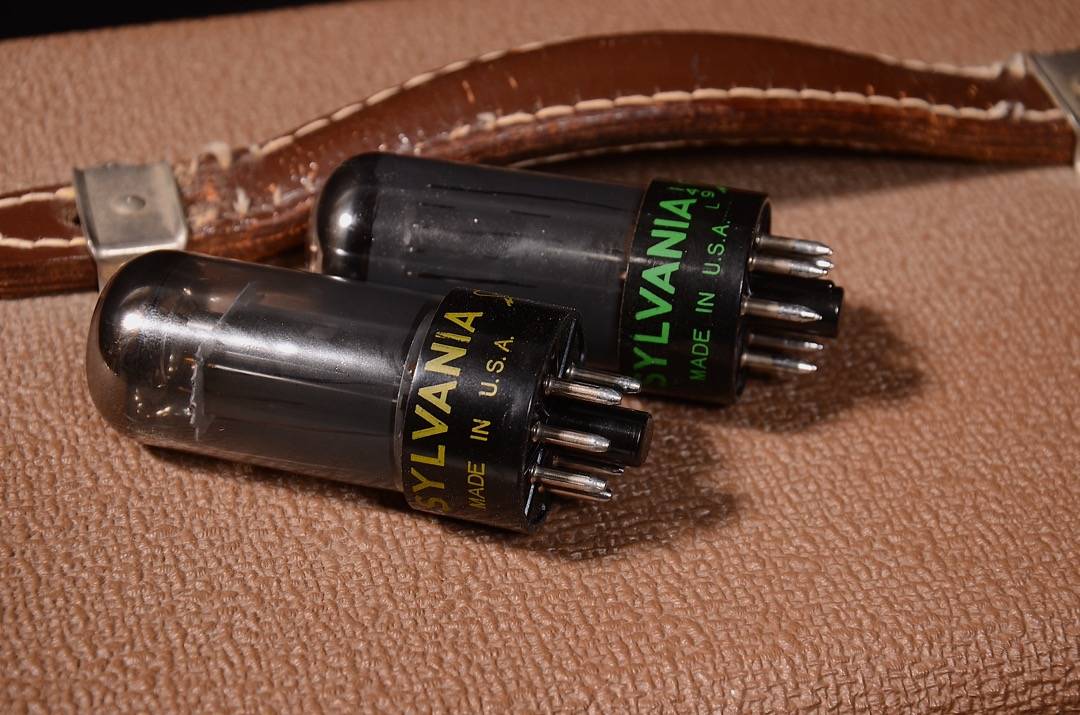 It is a miracle that we can now, more than 60 years later, experience for real the paint job and the sound that people were listening to when the instrument was first sold, and that the next owner can say, "This instrument is a real 'closet classic'. We cannot help but be moved by the happiness of being able to be living witnesses.

Special Thanks to Scott. 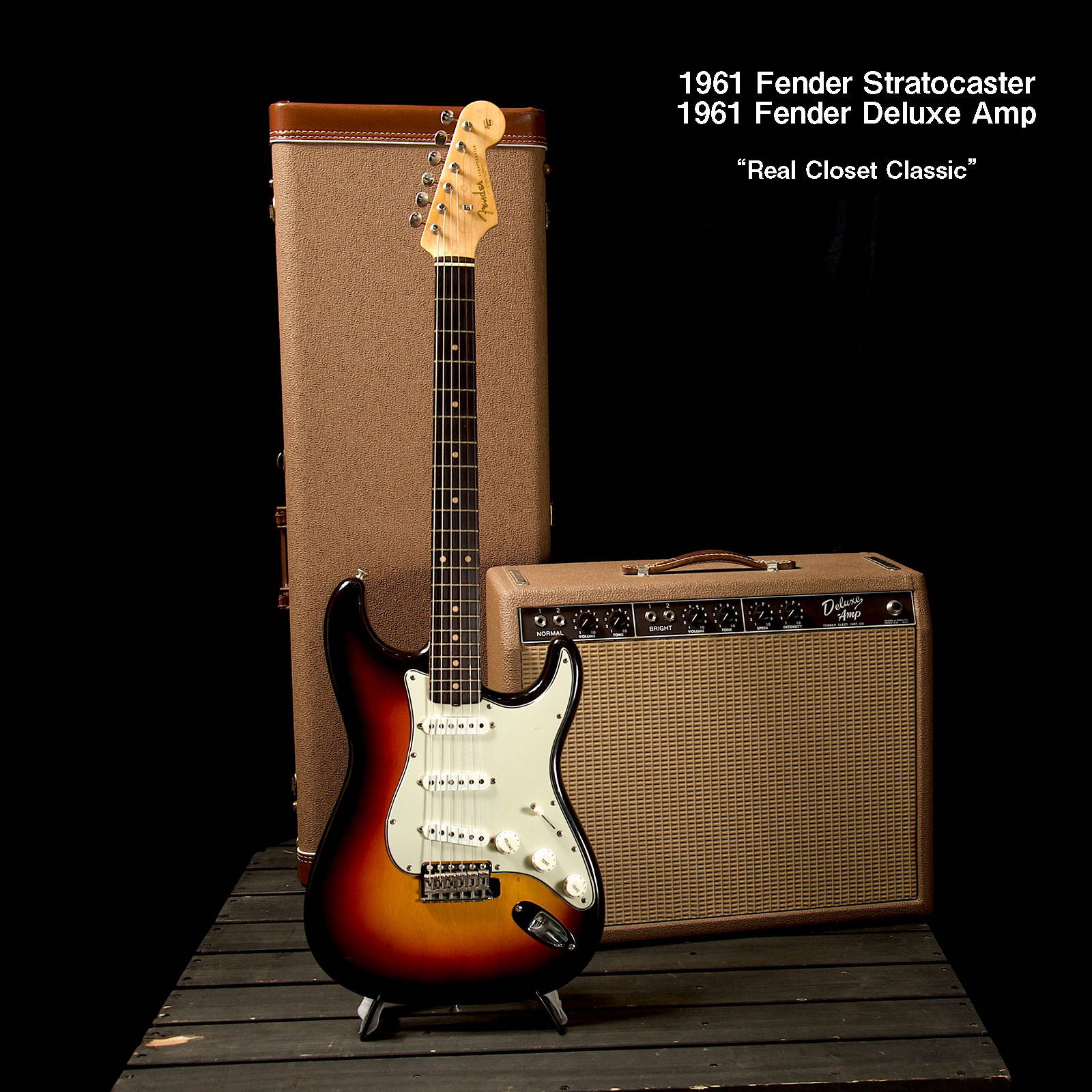