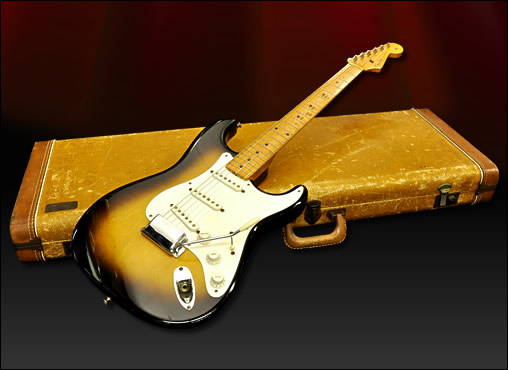 The year '56 is the year when the specification of the body material was changed, so it is a characteristic year with a mixture of ash and alder wood pieces.
The different core woods naturally affect the sound greatly, but there is no doubt that they both have their own unique and attractive tones.
This instrument responds well to picking, and the overtones when playing chords are quite pleasant. The treble is not so trebly, and I got the impression that it is soft even though it is crisp. 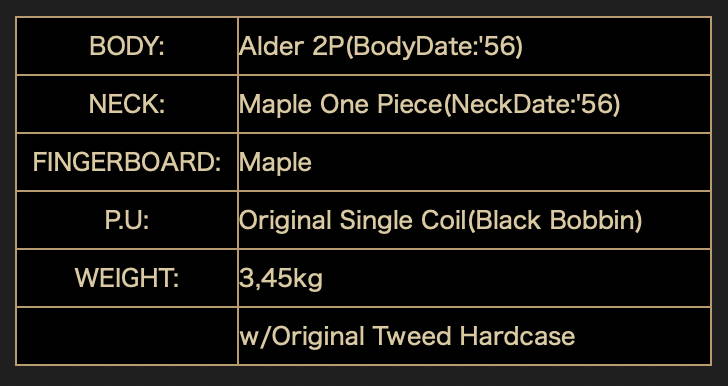 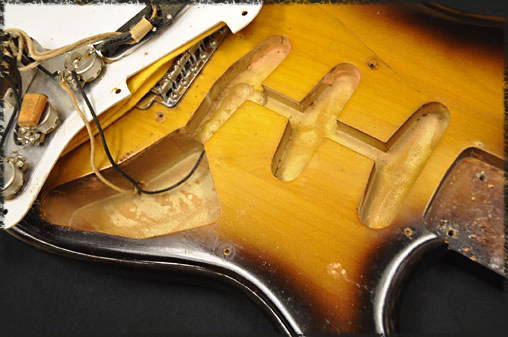 Basic '50s cavity. The control part changes to the shape where the screw holes protrude in the middle of '59 along with the change of the pickguard from a white 1-ply with 8 points to a 3-ply with 11 points. In addition to the screw holes, there are three pin holes for jig clamps on the part hidden by the pickguard (one hole was lost around '58, and there are now two pin holes). and one in the jack cavity. The datings on the body are marked on the spring cavity on the back. 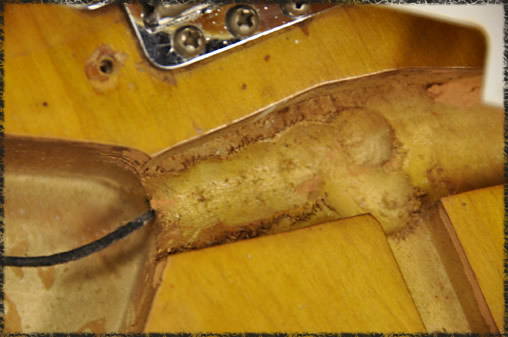 The groove for the wiring cord at the rear pickup is roughly finished. Although there are individual differences, it can be finished to a certain depth even if it is done freehand from around '57! 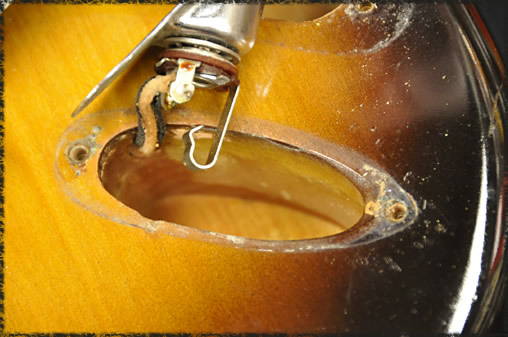 A "SwitchCraft" jack is used. There is another small hole next to the screw hole, which is a pin hole for jig fastening, and there are 3 holes on the body as well (the part hidden by the pickguard), 4 holes in total. 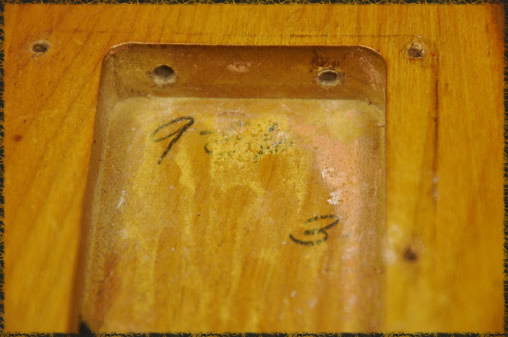 This is the body date marked on the spring cavity. It is a little hard to see because it is handwritten very roughly, but it is definitely '56. 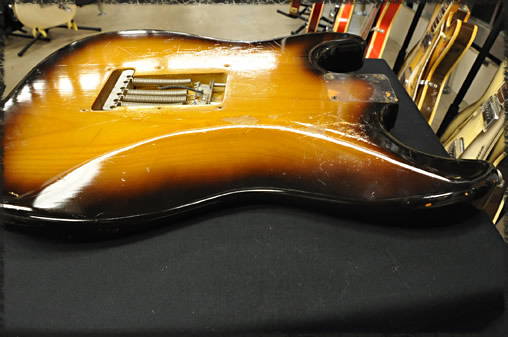 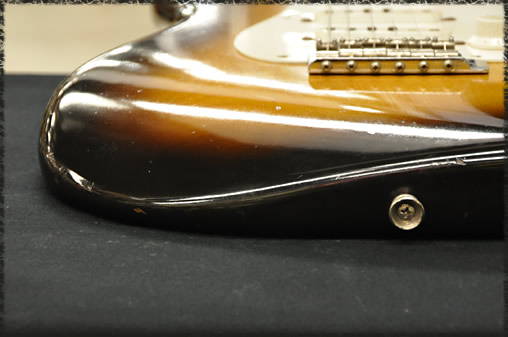 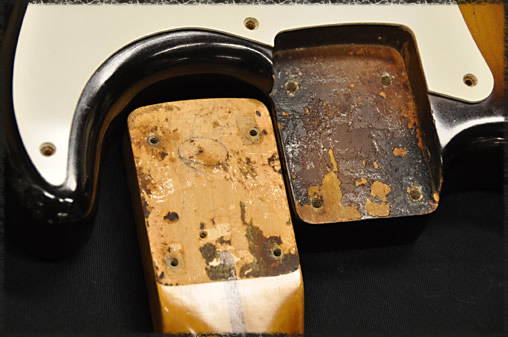 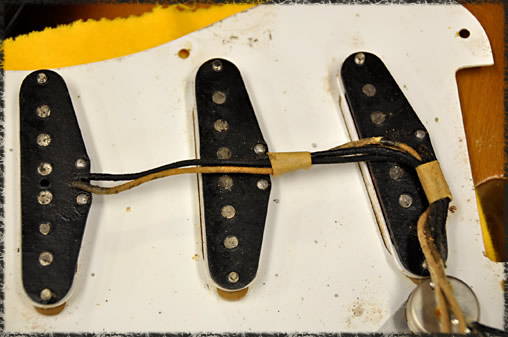 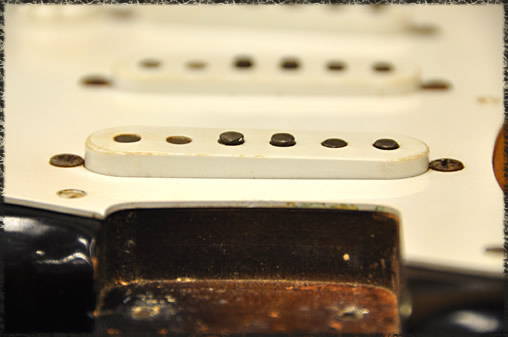 Original pickups with black fiber paper above and below the bobbin. Masking tape for wiring is still in place. The magnet of the pickup is Alnico type V with a diameter of less than 5mm and the coil is AWG (American Wire Gauge) #42. The pole piece is "staggered" type with different height for each string to balance the volume, which was used until mid '70s.
Alnico Type V: An alloy of approximately 50% iron with aluminum (Al), nickel (Ni), and cobalt (Co).
◎For your reference 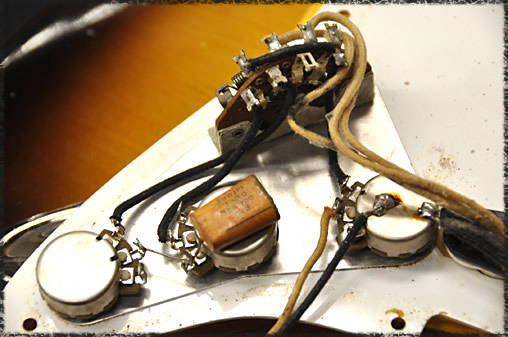 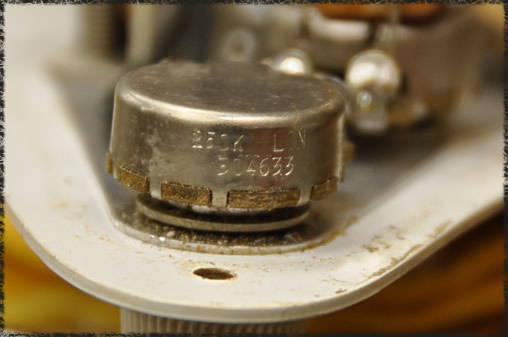 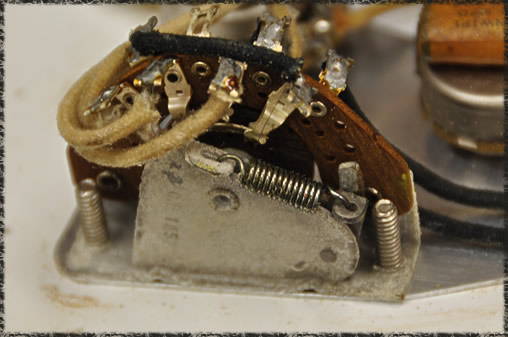 The pot is a "Stackpole" type without grooves. The pot date is "304633," which identifies it as the 33rd week of '56. The capacitor is a potted "CornelDubilier" 0,1μF 150VDC, and the switch is an original 3-point type made by "CRL". The aluminum shield plate covers only the controls, but from around '59 it was changed to cover the entire back side due to a change in the pickguard specifications. The pots also changed from a flat bottom type to a circular grooved type around 1957. 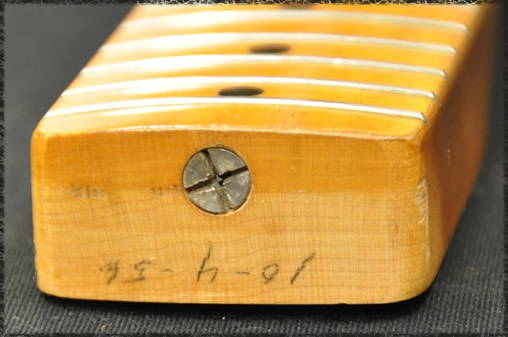 The year "56" can be confirmed by the handwritten datings. It is difficult to see the date because it is written upside down. 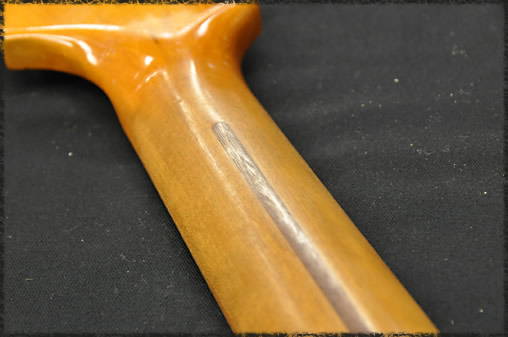 It has a characteristic "V-neck. When it first appeared in '54, the grip was thick and triangular, but from '56, the thickness of the grip became a little thinner and the angle of the triangle became stronger. The following year, the angle became even stronger, so the peak of the so-called "V-neck" specification can be said to be in '57. Thereafter, the neck shape gradually became thinner and the grip flatter. In the case of one-piece necks, the groove in the rod is filled with walnut wood in order to accommodate the truss rod from the back, commonly known as the "skunk stripe". 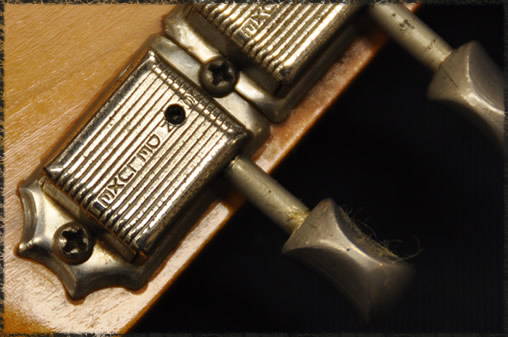 The pegs are "Kluson" covered type. The early type until the previous year had no engraving on the top of the cover, but from around 1956, it became a "single line Kluson" with "KLUSON DELUXE" engraved on it, which was used until around 1963. 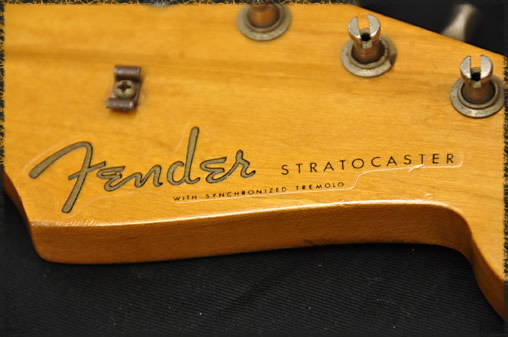 Gold with black borders, commonly known as the "spaghetti logo. From '54 onward, the large chamfering process is eliminated, and the headstock gradually becomes more angular. The string guide was changed from round to stamped corrugated in the middle of this year. The logo has not peeled off and remains beautifully. 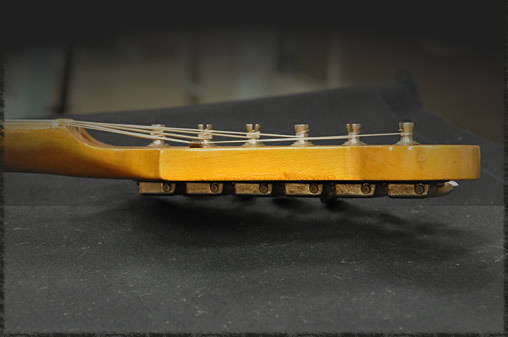 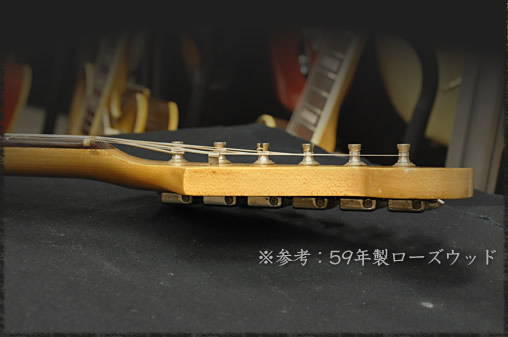 The shape from the fingerboard part to the headstock is a steep curve as if it dropped one step.'' The rosewood version from '59 has a larger, more gentle curvature.
◎For your reference
1st string side: 14mm, 6th string side: 14mm 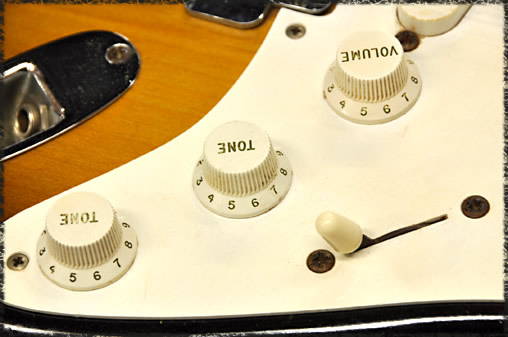 In 1956, the material of the control knobs and pickup covers was changed from Bakelite, which is easy to chip and crack, to nylon. Although stronger, Bakelite is resistant to discoloration, whereas nylon discolors yellow over time. 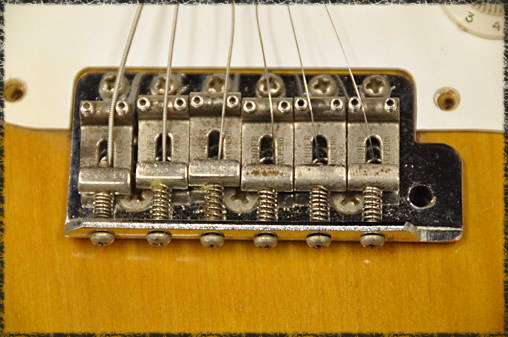 Separate type tremolo block that integrates the "bridge" and the "inertia block" that functions as a tailpiece. The name "synchronized tremolo" was derived from the fact that the integrated bridge plate and inertia block move synchronously when arming. From around 1957, a type with a deep groove for "FENDER PAT. PEND." engraved on the saddle was also adopted, but it seems that not a few of them are confused between the two. 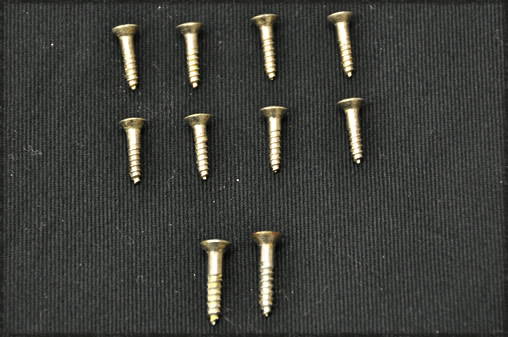 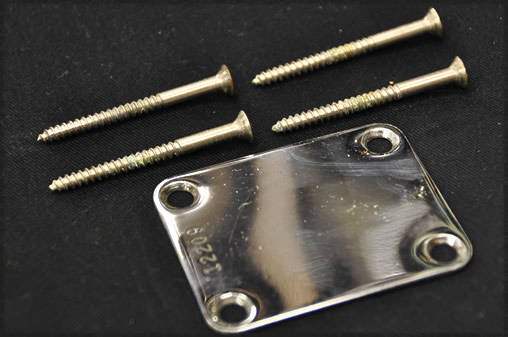